'Like a massage for my legs': This simple device is helping improve patient recovery following kidney transplants 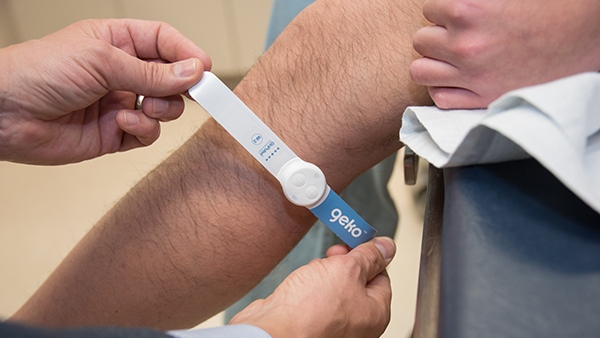 The Geko device is seen in this supplied photo from Lawson Health Research Institute.

LONDON, ONT. -- It’s called The Geko, and like the lizards it is small, but don’t let its size fool you because it can make a big difference for patients recovering from kidney transplants.

The Geko is a wearable muscle pump activator, designed to improve blood flow.

Researchers at Lawson Health Research Institute (Lawson) studied the device and found that patients using it following their transplant experienced shorter hospital stays and reduced infections by 60 per cent.

The study’s full-published findings can be found here.

“After surgery, many of these organ recipients require a longer hospital stay due to delayed kidney function, infection, lack of mobility or edema,” says Dr. Alp Sener with Lawson.

The geko™ device is non-invasive, self-adhering, battery-powered and recyclable.

How the device works is best exemplified by London Health Sciences Centre (LHSC) patient Reuben Garcia who spoke with Lawson about his experience.

Garcia, 68, received a new kidney from his daughter, but following his surgery he found it difficult to get out of bed due to pain and swelling.

“My surgeon explained in very simple terms that it was as if my new kidney wasn’t awake yet,” said Garcia in a release.

Garcia used the device to help stimulate blood flow in a way similar to walking. By the next day he was walking.

“I could feel the device working and it was comfortable to wear, almost like a massage for my legs.”

In a controlled clinical trial over two years, 221 transplant recipients at LHSC either wore the standard TED stocking and pump or the geko™ device for six days after surgery.

The team found that wearing the device increased urine output by 27 per cent and lowered weight gain.

As a whole patients experienced 31 per cent less swelling. The duration of costly hospitalization was shortened by over one day after kidney transplantation compared to the standard of care.

A 60 per cent reduction in wound infection rates was a big finding for the team.

“Reducing infection means a much better outcome for the patient and considering that recent data shows wound infections can cost the health care system thousands of dollars per person, it’s a win-win situation,” said Dr. Sener.

For more information about the wearable device follow this link.