LONDON, ONT. -- A new type of poppy campaign started by a local Lion’s Club is quickly spreading across our region and into other areas.

In that time clubs in St. Thomas, Dorchester, Port Stanley, and downtown Windsor have joined in.

Gary Martins started the idea in Lambeth, a London neighbourhood, after seeing a few of the poppies on the lawn of a relative’s retirement home last year.

He got together with other Lion’s members, including Dave Mitchell, and together they contacted the supplier in Ottawa.

Mitchell says it was clear from the start where the proceeds would be going.

“We had heard that that Legion Poppy Fund had struggled and that they were nowhere near the amounts that they normally raise.”

Randy Warden, zone commander for many London and area chapters of the Royal Canadian Legion (RCL) says he was ecstatic to get the phone call about the idea to top-up the fund's 10 per cent shortfall.

“With the proceeds going to the legions poppy fund on behalf of all veterans and the legion, thank you so much.”

After receiving approval from Legion Command in Ottawa, the lawn poppy campaign was born, but nobody expected how quickly it would grow. 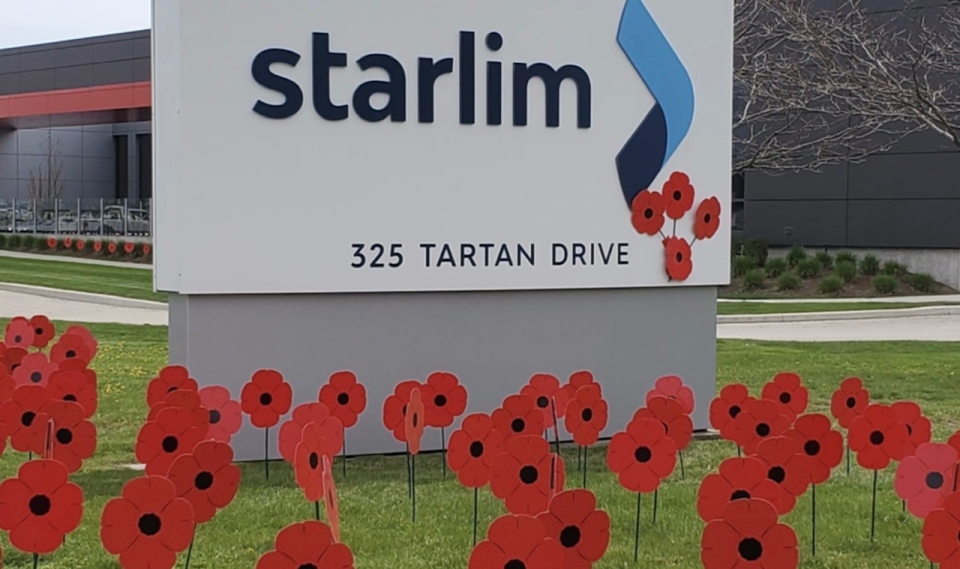 Through a newly launched website, sales have been brisk.

In Lambeth alone, $5,000 worth in just two weeks and now, with a newly launched website, individuals and groups can see what the poppies will look like.

Two city businesses bought in early and the Lion’s Club used them for promotional pictures.

Given production costs, Mitchell says slightly more than half the price will go to the poppy fund.

Martins says there an option to buy one directly for a veteran.

“They can buy some more if they want and give it to the veterans to put in front of the Parkwood Hospital or the cemeteries, and that’s taking off to, cause people just loving doing that type of thing and honour our vets.”

And Martin says there’s another place they hope to see the poppies populate.

“And so my dream is that we’ll have a see of red on Veteran’s Memorial Parkway this poppy season. It would be wonderful.”

"To see one poppy on a lawn or many poppies on a lawn, it’s showing that, an individual or business is thinking of our fallen and our veterans.”

The poppies take six weeks to make, so each participating Lion’s Club is asking for advance orders.

They’ll be fulfilled in the weeks before Remembrance Day.

Each cutoff date varies, so it's suggested you contact your local chapter.

It’s important to note, the campaign coincides with the 100th anniversary of the poppy being adopted as a symbol of remembrance.