INGERSOLL, ONT. -- Drinking water will not be impacted and greenhouse gas emissions would actually be reduced if a massive landfill is built in Zorra Township, just outside Ingersoll, according to the landfill's developer.

Among the key findings listed, the EA says drinking water will not be impacted because of the double composite liner and leachate system, which ensures groundwater and surface water are protected.

Project manager for the proposed Southwestern Landfill, Darren Fry, says the 12-foot-thick liner built around the landfill would offer protection.

“The landfill liner, comprised of alternating layers of very low permeability clay and plastic membranes as well as pipes that remove any liquid from the landfill, so the liquid within the landfill. And that liner system assures that no water or no waste ever comes in contact with the natural environment.” 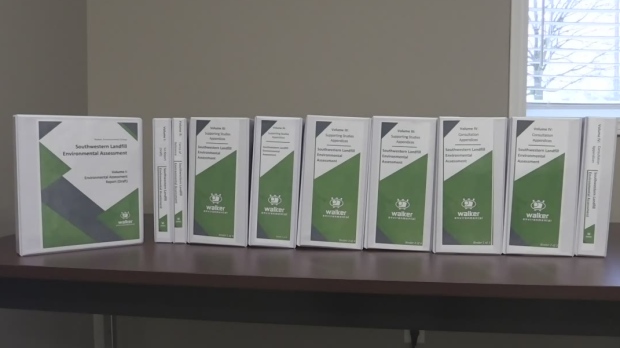 Bryan Smith is the president of Oxford People Against Landfill Alliance (OPAL), a group that’s been fighting the landfill for the better part of a decade.

He’s worried about the liner leaking into well water, and the nearby Thames River.

“Federal research and American research says that no liner of any kind is going to keep all of its contents in. It will leak into our groundwater and into the Thames.”

The landfill would accept 850,000 tonnes of solid, non-hazardous waste per year (plus daily cover), all generated in Ontario. It would be built in an existing quarry, which has already been mined.

According to a news release, the draft EA report is a compilation of eight years of scientific research and community engagement.

Another key finding in the report - greenhouse gas emissions would be reduced by six to eight million tonnes, as the southwestern Ontario location of the landfill would help reduce waste transport to Michigan.

The Walker news release says this is equivalent to taking 30,000 cars off the road each year

Ingersoll Mayor Ted Comiskey says he will continue to fight against massive dump on his town’s doorstep.

“Nowhere within the environmental assessment process did Walker ever come to Zorra Township or the Town of Ingersoll or South-West Oxford and say 'Do you want the landfill?' I think that's an important thing for the municipality to have the right to say 'yes' or 'no.'”

Zorra Township Mayor Marcus Ryan says the municipality will have the EA independently reviewed by experts.

“They're going to do that work in telling us where there are areas to be concerned about.”

The public is invited to provide input on the draft EA until June 15. Walker will then submit a final EA report to the Ministry of Environment, Conservation and Parks for a decision on the landfill.