FOREST, ONT. -- Work is finally underway on the expansion and modernization of the beloved century-old Kineto Theatre in Forest.

The local Kiwanis Club, which owns and operates the movie house, has managed to meet its original financial target, so far raising $630,000.

The only wrinkle is that the original estimate was way under budget.

Therefore the campaign continues as the goal has been adjusted to $1.1 million - the real cost of the project. 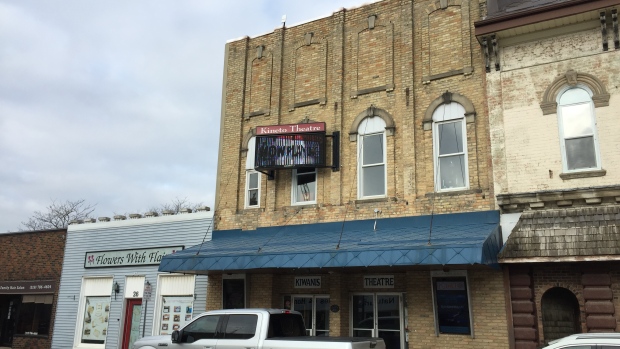 The good news, according to Illman, is that in just a few months the community came through in a big way with both financial and in-kind donations.

She’s confident they can raise the remaining funds through various grants and further fundraising initiatives.

The project includes expansion into the building next door, with a new ticket booth and concession, a new lobby, accessible and universal washrooms and a coffee bar. The auditorium will be expanded for accessible seating.

The contractor for the project is Wellington Builders, which did the last major revamp of the theatre in the late 1970s. Second generation owner, Joel Wellington, says the project hits close to home.

“It's always an interesting challenge to work on the old buildings. And just to add the fact that I have like a personal...I'm local, I've been to this theatre as a kid. I remember watching ‘Honey I Shrunk the Kids’ in the front row [and] being scared.”

The finishing touch will be a new marquis which links the two buildings - the original theatre and the shop next door.

The project was designed by London-based Matter Architectural Studio.

Architect Connor James says they wanted to maintain the vibe of the downtown street.

“It's going to look like something that enhances the experience of an old theatre. It might have flares of new ideas but the idea will remain very old and rich.”

The renovation is expected to be complete by fall.