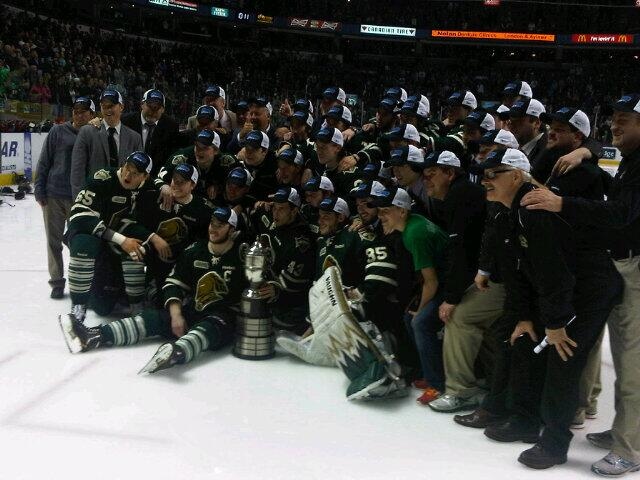 Domi, the son of former NHL tough guy Tie Domi, had two goals and three assists for London, which blew a 4-0 nothing lead before clinching the series on home ice.

Alex Broadhurst, with two goals and an assist, and Bo Horvat also scored for the Knights, while Chris Tierney picked up three assists.

Anthony Stolarz made 37 saves to get the win for London.

Garrett Meurs, Ryan Hartman and Gianluca Curcuruto each had a goal and an assist for Plymouth, while Rickard Rakell also scored. Alex Nedeljkovic made 29 stops in taking the loss.

London now awaits the winner of the Eastern Conference final between the Barrie Colts and the Belleville Bulls. The Colts lead that series 3-2, with Game 6 set for Saturday in Barrie.

Domi and Broadhurst scored in the first period before Horvat and Broadhurst, with his second of the night, added power-play goals at 2:30 and 6:49 of the second as London jumped out to a 4-0 lead.

Rakell then made it 4-3 at 11:42 and Curcuruto completed the comeback at 15:27 before Domi completed his heroics — and saved the Knights some embarrassment — in the extra period.

London finished the night 2-for-5 on the power play, while Plymouth was 0-for-2