LONDON, ONT. -- Daniella Leis has been sentenced to three years behind bars for her actions, which led to the explosion that rocked Woodman Avenue in London, Ont.

In his ruling Justice George Orsini told the court, "She made the decision to drive when she had to know she was in no condition to do so...she left a devastating and lasting impact on members of the comunity."

Of his client's reaction to the sentencing Braiden says, “She continues to be very remorseful and she’s accepting his honour’s decision.”

The court heard that Leis had mixed drugs with alcohol while at a concert at Budweiser Gardens.

She then got into her father’s car and drove the wrong way down Queens Avenue before crashing into a home’s gas meter on Woodman Avenue.

It has been roughly 18 months since Leis crashed into that home on Woodman.

Emergency crews were on the scene within minutes working to evacuate as many residents from homes as they could.

Soon after the street was rocked by an explosion that levelled one home and left others damaged beyond repair.

Amazingly, no one was killed in the explosion, but several people were injured, including first responders.

At her sentencing hearing Leis said via Zoom, “I can’t express how truly sorry I am for what I have done...for that I will never forgive myself.”

Last month a lawsuit was filed against Leis, her father (who owned the car), the City of London, and Spectra - which operates Budweiser Gardens. Also named in the suit is Ovation Ontario Foods and ABC Security. 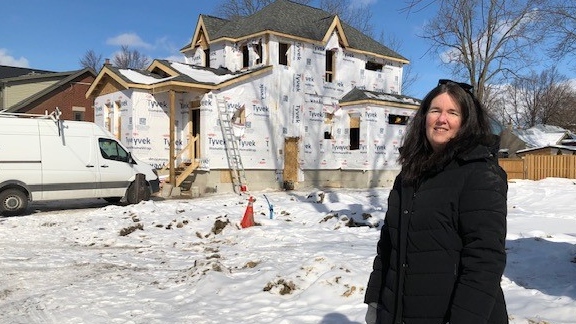 Karen Fisher lived at 450 Woodman Ave. and says she’s trying to move on with her life with the new build on the same lot.

She is looking forward to moving in sometime in June. She still feels anxious over the whole ordeal, but says she’s trying to put it all behind her.

“I would say over the past three weeks, my anxiety levels have been quite high…but I’m just hoping to have some normalcy going forward.”

As for the three-year sentence handed down, she says, “Part of me wishes that it was more, but I honestly don’t think that would deter anyone from drinking and driving…all in all I would say I’m satisfied.”

Jessica Leeming lived on Woodman Avenue and grew up in the neighbourhood.

She was forced to move away after the house she lived in was destroyed by the explosion and continues to be upset.

After the sentencing she said, “I’m still angry…I feel like I got kicked off of the street that I chose to live in.”