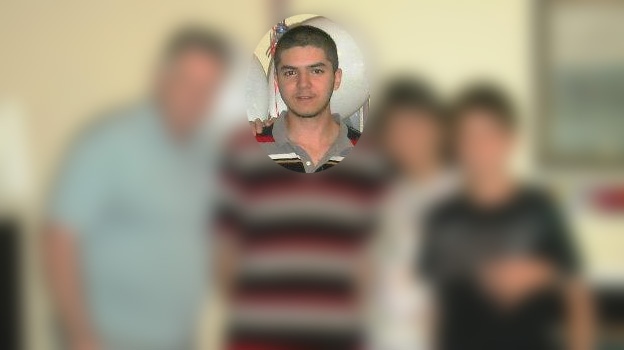 James McCullough is charged with first-degree murder in the death of 20-year-old Alex Fraser. (Source: Facebook)

*GRAPHIC WARNING: Readers may find some of the details to be disturbing*

A man on trial for murder told jurors Monday that he stabbed his friend in a hotel room after an unwanted sexual advance and then blacked out.

When he regained consciousness, the friend's body parts were lying in a bathtub.

"I'd just killed one of my best friends. He was dismembered," James McCullough told a London, Ont., courtroom. "I threw up because of how disgusting it was."

McCullough, 22, has pleaded not guilty to first-degree murder and offering an indignity to a dead body in 20-year-old Alex Fraser's death.

Fraser's body parts were found in two hockey-style bags in a hotel room the two friends shared for a night in September 2013.

Fraser, McCullough said, was "a great guy, an intelligent guy, a computer whiz." The two would hang out on weekends, drinking and doing drugs, he said.

Around the time of Fraser's death, McCullough used to deal marijuana and cocaine, court heard. McCullough also said he was taking anxiety medication at the time, but wasn't taking pills he had been given for psychosis.

The trial has heard that on one Saturday night, after first drinking at McCullough's home, Fraser and McCullough took a cab from Orangeville, Ont., where they lived, to London, with Fraser clearly intoxicated at the time.

McCullough explained that there were three reasons for the trip -- to party, to go shopping for clothes and to conduct a home invasion on a residence where he once lived when he had attended a college in the city.

McCullough said he brought alcohol and two hockey-style bags on the trip, as well as a knife and knife-sharpener that he said he usually had on hand "for protection," because he was a drug dealer.

The jury has heard that the men checked into a Travelodge, where McCullough gave a fake name, a fake address and paid for the room in cash. The phoney name, McCullough said, was so that he couldn't later be connected to the home invasion he and Fraser were planning.

Once in the room, the two young men drank about six shots of tequila each, talked about their plans in London and McCullough had some cocaine, he said.

McCullough then went for a shower and when he emerged from the washroom, he saw Fraser standing in the room, naked, between the two hotel beds, he said.

"I said 'what are you doing, put your clothes on.' He said he had liked me for a long time, he wanted to have sex with me," said McCullough.

"I'm not sexually oriented that way and he knew that, so I don't know why he was trying to do that with me."

McCullough got angry and pushed Fraser, who made a grab for his genitals, he said. The two got into a tussle and Fraser fell to the ground, at which point McCullough said he "freaked out."

"I grabbed my knife from my backpack and I stabbed him twice," he testified. "I took a couple of steps back and everything faded to black."

The next thing McCullough remembered was waking up on one of the hotel beds, recalling the stabbing and going into the washroom to see Fraser's dismembered body in the bathtub, court heard.

"There was blood all over the place," he said, adding that he felt "horrible" at the time.

"I started panicking, I felt overwhelmed," he said. "I placed him in the hockey bags...that was probably one of the worst things I ever had to do in my life."

During cross-examination, however, court heard that McCullough, despite his disgust, bought fast food which he munched on in the room he had cleaned up -- while Fraser's body parts were nearby -- and sipped tequila from a liquor bottle splattered with Fraser's blood.

Much of McCullough's story, prosecutor Meredith Gardiner suggested, was flawed.

"Someone who stabs their very close friend and causes their death in the spur of the moment, has no reason to then dismember their friend's body," she said. "You can't offer us a plausible explanation for doing those things and that's why you're claiming to have blacked out."

Gardiner also pointed out that McCullough told police he used a phoney name anywhere he went because he was paranoid and thought the government was trying to kill him.

"You weren't in fact under a delusion," said Gardiner. "You lied to police because you wanted them to believe you were mentally ill. Because you didn't want to go to a jail, you wanted to go to a mental hospital instead."

The Crown also noted that McCullough told police Fraser was the one who wanted to kill him and owned the knife found in the room.

The trial heard that after Fraser died, McCullough reached out to an old acquaintance in the hope of getting a ride out of town, but the friend refused.

McCullough eventually called 911, saying repeatedly "someone is dead and I am unarmed."

When asked why he called police, McCullough said he did so "because it was the right thing to do."