'It's heartbreaking': VON nurse gets emotional on day 11 of Sarnia-Lambton strike

SARNIA, ONT. -- While nurses across Canada are being celebrated during National Nurses Week, VON nurses in Sarnia, Ont. are standing on the picket line for the 11th consecutive day.

"To have to be out here at the side of the road when we could be helping somebody is in need of us... it's heartbreaking," says Alicia Pegg, a VON nurse in Sarnia-Lambton.

"I don't fully think that VON realizes the mental impact that this job takes on us every day and then to hear that they don't want to even pay us a 1% wage increases just, it's disheartening."

Pegg took to social media Monday with an emotional video where she poured her heart out to her employer.

"We work over our shift times so our fellow co-workers are not overloaded," says Pegg while holding back tears in the 2:23 video.

"And we get no extra security measures when we get pulled out at 3 am for a crisis, but we go. Because our patients need us. We deserve better from VON." 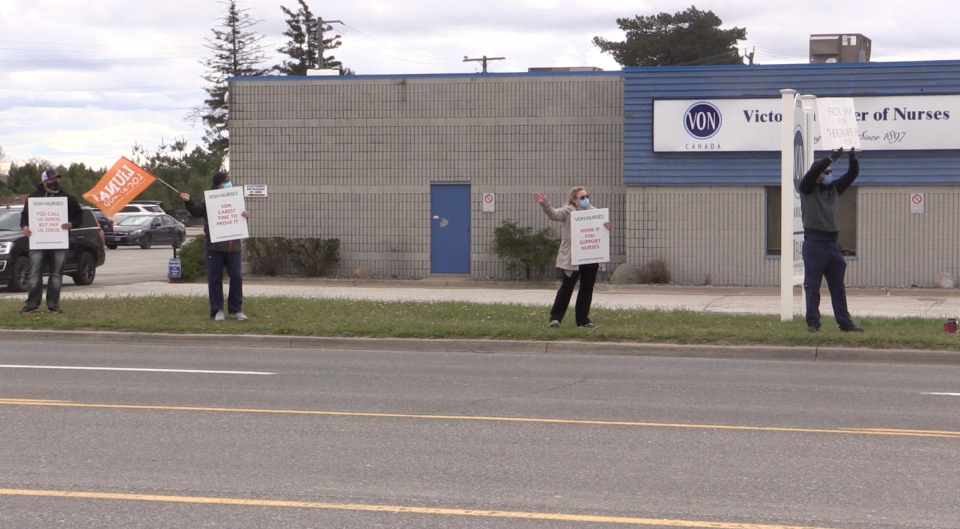 CTV News reached out to VON Canada and requested an interview. They responded with a statement.

"It is a challenging time for everyone and we continue to work closely with our community partners to limit any potential impact on our clients and their families," says VON.

"We value and respect the work of our employees and have a strong commitment to fairness. VON is fully committed to the bargaining process, and to continuing to work toward a resolution."

Liuna Local 3000 says there there has been no bargaining.

"It's day 11 and I don't have an update for you," says Ken Sharpe, director of field operations for Liuna Local 3000. 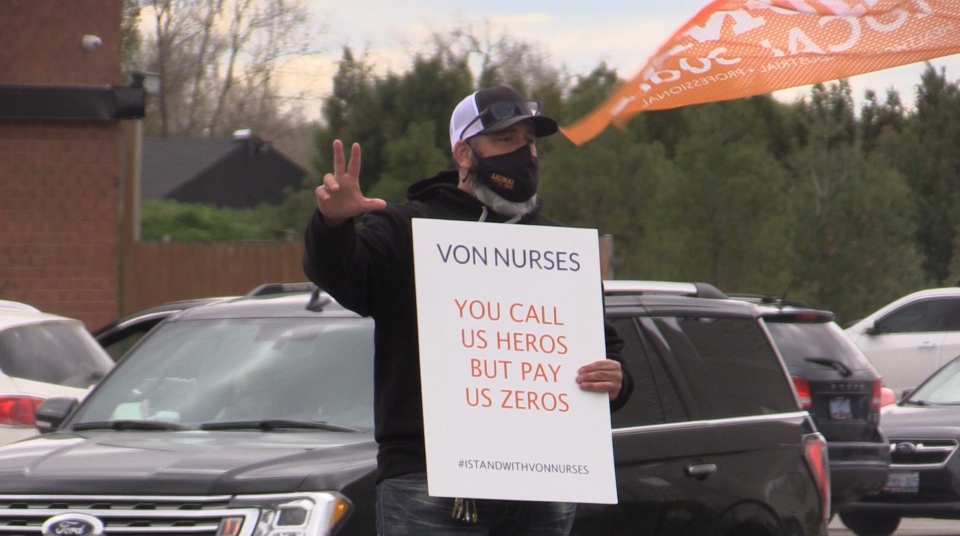 VON has visiting nurses and shift nurses in Sarnia-Lambton.

"The shift nurses are basically considered casual nurses, and because of that they get no sick time, they get no bereavement leave and they get no benefits," says Sharpe.

"They're going into schools, every single day with children, and they have no access to sick time if they get sick. There's no compensation to stay home. The government is imposed 1 per cent total compensation packages right now, and VON refuses to even give, give the bare minimum of what they can. Year one of this collective agreement they've offered the nurses zeros and a point five lump sum, which translates to about $4.20 a week for a full-time nurse."

Sharpe also took aim at the money being spent by VON Canada which could be going to the front-line nurses.

"They are shipping in nurses from London and Windsor, putting them up in hotels, paying the meal allowances to stay here," says Sharpe.

"All the while, where they leave these nurses standing on the street and refuse to give them fair compensation for the work they do. They've also got round-the-clock security on this building with two guards in a car to guard this building 24 hours a day seven days a week against nurses."

Pegg says her team is a dedicated group of nurses who love their job, and their clients.

"To know they're being sent to the hospital early when they're supposed to be at home with their family on those last days of their life, and then they get pushed into the hospital because we can't do our job, it's sad," says Pegg.

"I've had with families that I've cared for and, you know, those, those times where we do sit with them as they're dying, and we share those moments with their family, and then to have to come here and picket when we could be using our skills elsewhere is. It's really hard."