'It's financially hard': Lambton County set to lockdown for a third time

PETROLIA, ONT. -- One final haircut at Total Hair and Body Care in Petrolia, Ont. before the Lambton County moves to the grey restrict zone.

The doors closed at 3 p.m. Saturday and will not open again until the province gives them the green light.

"You work hard all your life to eventually own a business, and I finally did to have it shut down for a third time, it's financially hard," says Jennifer Pama, the salon's owner.

Personal care services are among the businesses which will be forced to close Monday in the grey zone. 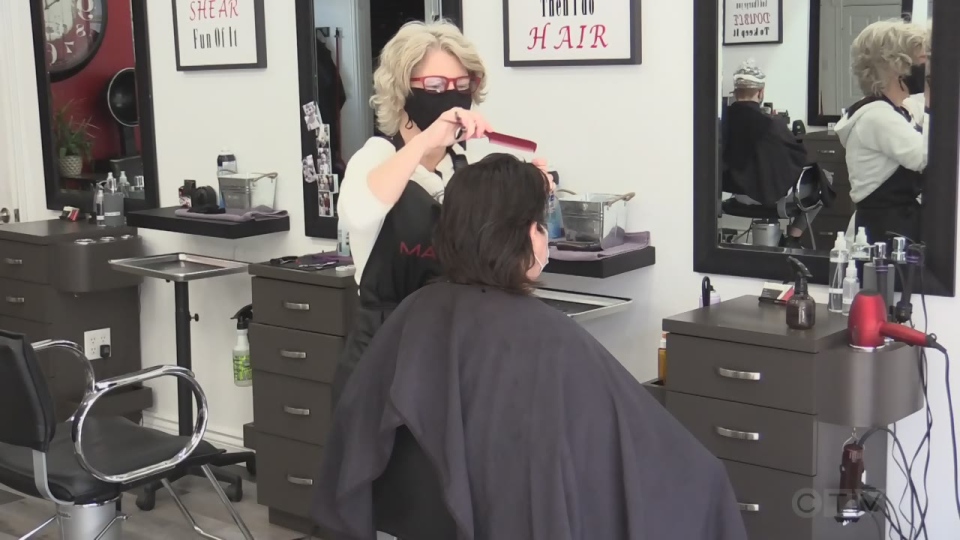 A client gets a haircut at Total Hair and Body Care in Petrolia, Ont. on March 13, 2021. (Brent Lale/CTV London)

Others include casinos, museums, indoor dining at restaurants and sports and fitness facilities.

"Grey means we will be closing at the end of the day Sunday," says Tracey Taylor, the general manager of the Petrolia YMCA.

Three branches in Lambton County will go from 10 people allowed inside, to zero.

"Our membership is down, 75 per cent across our association of 15 branches which is significant. Our full-time staff will work from home, part-time staff won't have any hours. Hopefully it's not too long".

Sudit Ranade, Lambton’s medical officer of health explained Friday why the county was moving up a level.

“Increased rates of COVID-19 cases, including a growing proportion of variants of concern, a number of active outbreaks and significant evidence of community spread, are key indicators that support this decision," Ranade said in a statement.

At Petrolia City Hall, Mayor Brad Loosley is disappointed, but not surprised to be moving to Grey.

"We were doing so much better in red," says Loosley.

"People were supporting local business and residents were good. Our numbers aren't there, but Petrolia is doing well. I feel we are lumped together with other municipalities but I want residents to be patient and be kind. We are working on vaccinations, and we want to get that done as quickly as possible and hopefully get out of Grey in the next couple weeks".

The municipality is working hard to promote shopping locally, especially during the upcoming stretch.

"We've been focused on that local message, but now specifically. The cool thing is many businesses are working together. The bakery is providing pretzels to the brewery, and brewery is making beer cheese for them. Everyone is working together and that has been a positive that has come out of this".

Back at the salon, Pama says the timing is terrible, as they were just getting caught up on bookings from the previous lockdown just three weeks ago.

"We can't book people because mentally to have to call people and re-schedule its tough. We are hoping a short lived lockdown but we'll see."