LUCAN, ONT. -- Just 15 years after the abolition of slavery in the southern United States, a young Black man unknowingly became a trailblazer in policing in Southern Ontario.

In 1880, Peter Butler III was appointed a county police constable.

Today his descendants believe he was given the role, perhaps, because nobody wanted the job.

Butler had just taken on policing when the Donnelly massacre occurred, claiming five members of that family.

“After the Donnelly massacre, he was one of the first people there, and he sat on his horse waiting for the coroner to come in the morning.”

Thankfully, the infamous murder became the greatest crime in his career in policing, which stretched over 50 years.

While initially a county constable, Peter became an officer with the Ontario Provincial Police in 1913.

It was a different time and he remained on the force into his 70s.

But while he served with pride, his grandson, 95-year-old Ed Butler, says he knew little of his grandfather’s profession.

In fact, he thought he had been a life-long farmer until Ed helped his dad tear down his grandfather's home in the late 1940s.

“My dad had always said that he wasn’t an officer. He wasn’t a policeman, but I tore his house down after he had died, and I found his certificate of being discharged from the Ontario Provincial Police.”

It wasn’t all he found. He also came across a billy club and a set of handcuffs Peter had used.

Today both hang from hinges on a slab of wood taken from Peter’s old barn. 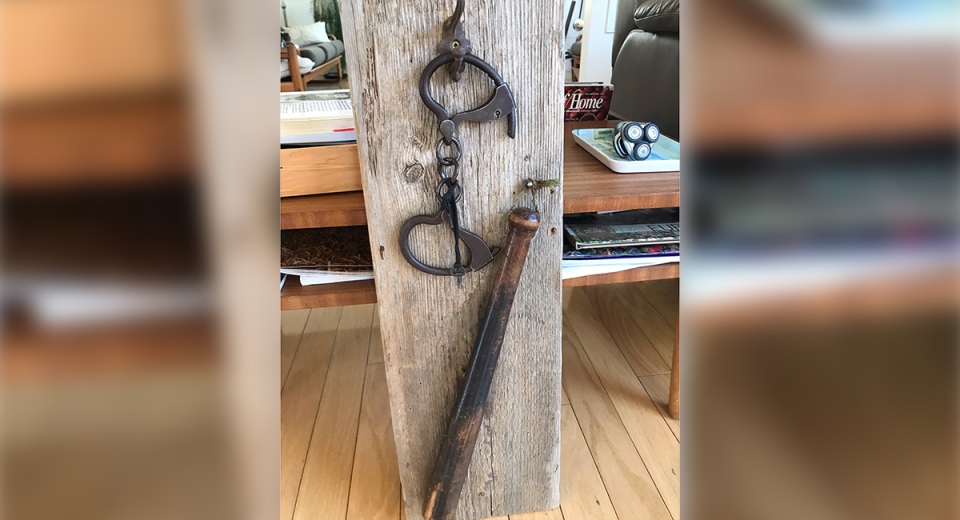 A set of handcuffs and a billy club used by Const. Peter Butler III while serving as a police officer in Lucan, Ont.

Both Ed and his niece Marlene do not believe Peter ever realized he was the first Black officer in the OPP.

After all, in Lucan Black townsfolk were accepted and respected as founders of the community. Even in the 1880s, they say, Peter's appointment would have not turned heads.

Peter was the grandson of one of the first settlers. Most were Blacks fleeing poor treatment in free, but at that time still oppressive, Ohio.

Peter Butler the I was among the first to arrive in 1829.

Ed says he learned his grandfather, Peter the III, was known to be a “fair and square lawman.”

It is a statement, Marlene, who has researched much of her family's history, backs up.

She says her great-grandfather was “ahead of his time” when it came to his treatment of prisoners.

“He would bring people out of the jail and put them to work, so they could go forward."

He was also ahead of his time when it came to the use of force. Although he had a service revolver, Marlene said it was rarely seen.

“He never carried a gun unless he had to escort prisoners from one jail to another.”

The story of Peter Butler III has become well known locally, even inspiring a mural downtown.

Now Peter is also being recognized by the police force he served.

This past week Ed accepted the Regional Commanders' Coin from The OPP on behalf of his late grandfather.

Ed tells CTV News London he was proud to accept it, even if it is overdue.

“They should have done it when he was alive.”

But Marlene counters her uncle, saying the award is “wonderful” for the Butler family, which nowadays extends from Lucan back into the United States.

"Everyone just thought that was amazing. It makes you feel really proud.”