LONDON, ONT. -- In a unanimous three-zero decision, City Hall's Compliance Audit Committee has decided to retain an independent prosecutor who will launch an investigation into whether Paul Cheng violated the Municipal Elections Act by over contributing to his 2018 mayoral campaign.

It took just 10 minutes of deliberation behind closed doors for the committee to reach a decision.

In a report on the 2018 campaign finances of the mayoral candidate, Auditor William Molson concluded, “It appears that Cheng contributed $98,508.26 to his campaign and thereby exceeded his permitted contribution limit of $25,000 by $73,508.26.”

The auditor gave a detailed dissection of Cheng’s finances at the beginning of Friday's meeting, although he admitted about 45 per cent of the expenses were not detailed in the financial records.

If the independent prosecutor determines there is sufficient cause, he would refer the matter to the courts, where a judge would ultimately decide if the act was violated and if there would be penalties.

“They have to decide what they can make stick, if you’ll allow me to use the vernacular,” explained Andrew Wright, the committee chair. “Based on that they will lay charges or if they conclude there is not reasonable prospect of prosecution they won’t lay charges.”

According to City Clerk Cathy Saunders the penalties for violating the act can range up to a $25,000 and/or up to six months in jail.

Paul Cheng spoke briefly to the committee. In a campaign-style speech he suggested that City Hall's priority right now should be the pandemic and not the 2018 election.

“Get the 400,000 people (of London) vaccinated. Then if you want to prosecute me over $5 or $25,000... fine. I’m here,” Cheng challenged city administration and the independent committee.

During the meeting Molson also detailed a relatively small, but he believes substantial, concern related to a $500 donation.

The donation was originally made during the campaign by a private company, which was no longer permitted in 2018.

After the campaign, Cheng returned the money, which was replaced by a personal donation from the owner of the company.

“To subsequently go to this person, and say I would like you to replace this funding, and then take a contribution more than two months after the campaign period, that’s a significant contravention (of the Act),” Molson told the committee. “That’s not okay.”

A chart prepared by Molson for his audit report shows that Chang’s campaign finances had reached a point of no return regarding compliance with the Act three months before Election Day. 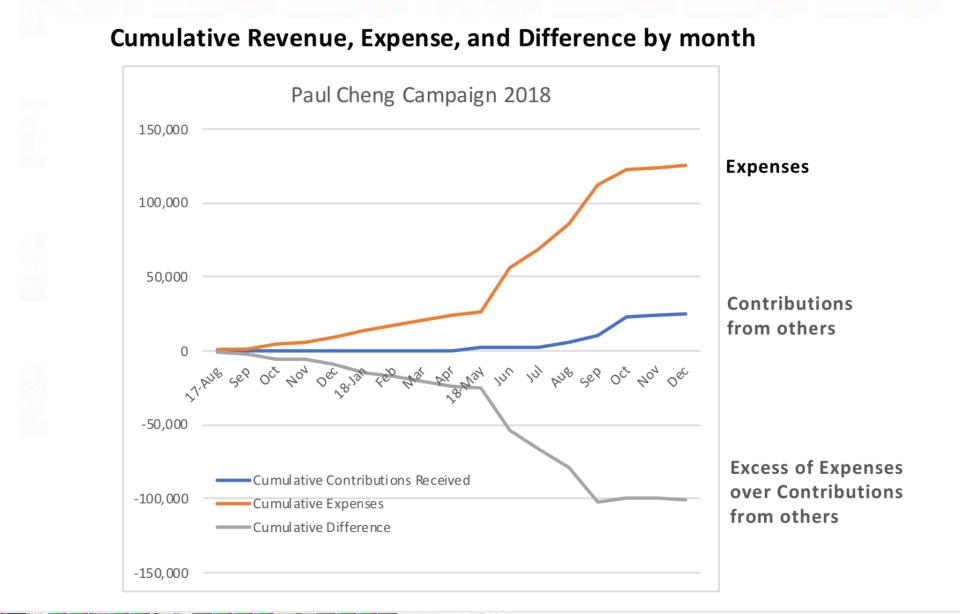 Molson told the committee that Cheng admitted his statement to CTV News in October 2018 that he had consulted lawyers and that his finances were in compliance, was not true.

It was in 2019 when City Hall received two complaints about Cheng - that he campaigned before the legal start of the campaign period and exceeded the maximum amount that a candidate can contribute to their own campaign.

In February, one of the complainants, Lincoln McCardle, told CTV News that the limit prevents candidates from using personal wealth as a competitive advantage to seeking elected office.

“It would have made it difficult to compete against that candidate for a lot of people,” said McCardle.

According to the Municipal Elections Act, campaigning cannot begin prior to registering as a candidate.

Registration began on May 1, 2018, but the audit determined that in Dec. 2017, Cheng rented an office inside 536 Queens Ave. and that some of the activities led to expenses and candidate contributions prior to the campaign period.

“Cheng apparently accepted contributions in-kind of $750 and incurred expenses of $23,785.22 prior to registering as a candidate on May 1, 2018,” Molson wrote in his report.

Those expenses were related to rent, exterior office signage, creation of a YouTube video and the development of the website paulchenglondon.ca.

After finishing second in the 2014 race for the mayor’s office, Cheng finished fourth in 2018.