LONDON, ONT. -- From the crack of the bat, to the smack of the glove, baseball fans are missing sounds of summer.

However for the Ontario Nationals Baseball Club, they are hearing them four hours a week.

"When the province moved to allowing groups of 10, we got outdoors on our home field in St. Marys," says Jeremy Jayaweera, owner and president of the Ontario Nationals.

"We have four hours practices, breaking it up with 10 people on this field and 10 on that field, rotating."

The club in the Canadian Premier Baseball League (CPBL) has been using distancing protocols to hold practices - which includes sanitizing, disinfectants and keeping six feet apart.

"This is my favourite thing to do and I'd rather be nowhere else, so this is awesome for me," says Bennett Moore, a pitcher from Goderich. 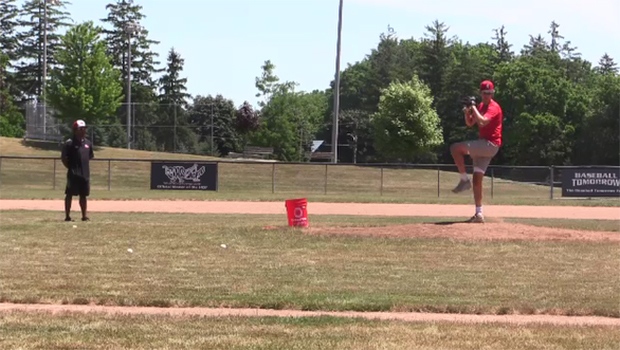 His catcher, Dylan Howard of London was sick of hitting balls off a tee into a net, so getting to resume practices has been a game changer.

"It's nice to get live at bats in," says Howard. "It's a lot different than game situations but hopefully we can do that soon."

They are hoping to begin game action, and there was even a mention that it could happen as early as Saturday

"If the government extends to phase three we'll be able to play live games," says Jayaweera. "I think right now it's 90 per cent realistic that we'll play baseball."

If game action does resume, there will be some changes.

Jayaweera says the plan is to have the home plate umpire stand behind the pitcher instead of behind the catcher. The defensive team would be the only ones to touch the ball, including retrieving foul balls. They would also have hand sanitizer, and instead of using the dugouts, the players would stand six feet apart down the baselines.

Moore and Howard are both heading south to play college baseball in the U.S. this fall.

They are frustrated their final year of junior is still in question, but are hopeful there's a chance to at least see a few games before the end of summer.

"It's tough having it happen in our final year," says Moore, a Goderich pitcher who is heading to Johnson County Community College in Kansas.

"It's been nice to have time off to get better by lifting weights but I'm excited to get back on the field for sure."

Howard is going further, heading to the Texas panhandle to play for Frank Phillips College.

"I've been itching like crazy, its brutal," says Howard.

Jayaweera says his club was supposed to go on a spring trip south in March, but the day before they were to leave, it was cancelled.

They started working out in Thorndale with five people, but have since been able to do outdoor workouts.

He believes his team and the Great Lake Canadians based out of Dorchester will be ready to go when the province gives the thumbs up.

However, the other Toronto-based teams in the CPBL haven't had the luxury of the same access as the London-area teams.

Still, he believes they will get some form of a season.

"I think with numbers going down in Canada and here in Ontario, we see the light at the end of the tunnel," says Jayaweera.