'I saw my dad's trailer get tossed in the ditch': Father and son recall surviving Sunday's storm

LONDON, ONT. -- Nick Thibert calls it the "most terrifying experience" of his life.

The 20-year-old Windsor, Ont. native and his father, Joe Thibert, were travelling home from Pinery Provincial Park in Grand Bend, Ont. along County Road 9 near Thedford, Ont. during stormy weather on Sunday.

That's when they found themselves right in the middle of what might have been a tornado.

"All of a sudden it went black and started pouring," says Joe, who was pulling their trailer after a week of camping.

"I saw the wind and the heavy rain, and the trees were at a 90-degree angle. The trailer lifted up and I tried to swerve back, but it wouldn't let me. That's how strong the wind was."

Nick was following behind his dad pulling a jet ski with his truck, when he saw his father's trailer go airborne off all four wheels, and flip the truck into the ditch along with it.

"In a split second I saw the truck and trailer as a unit get picked up and get tossed in the ditch," says Nick.

"I was in shock and I couldn’t believe my eyes. I was like that's my dad and my dog in that truck and felt so helpless watching this unfold. I put my truck in park and grabbed my tourniquet and every first aid item I had. I ran to the truck expecting the worst. I thought he might be pinned and my dog as well."

However, when he opened the truck door, both his father and his dog were uninjured. 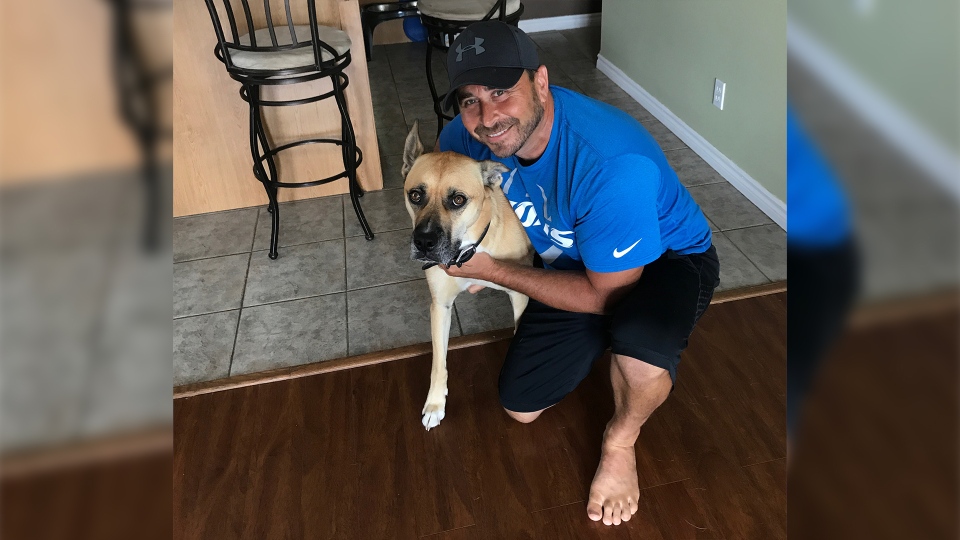 Joe Thibert and his dog, seen in this family photo, both survived having his pickup flipped by strong winds with almost no injuries.

"For him be OK, it was remarkable," says Nick.

Joe went to the hospital Tuesday to get checked out after feeling a bit sore, but is doing OK.

"All things considered, we can't ask for a better outcome. Not a scratch on him, worst case is he may have a minor concussion. My dog is OK as well," Nick adds.

Joe says he thinks he may have had some help from up above.

"My mom and dad aren't here right now, but they were watching over me for sure," says Joe.

Both of them will have a story to tell for the rest of their lives about how they were right in the path of what was likely a tornado.