The London Transit Commission (LTC) is once dealing with a rash of incidents where the glass in bus shelters have been smashed out.

Ashlaigh Potter heard strange noises during the early morning hours late last week. Then there was a jarring noise that gave her the most concern.

“I heard like this catastrophic shattering and the bus shelter was broken when I woke up the next morning,” she said.

The shelter sits a few meters away from the patio of her ground floor apartment along Proudfoot Lane, south of Oxford. The glass has been pushed into the structure and has been sitting there ever since, with caution tape wrapped around the shelter.

The shelters are made with tempered glass that shatters into tiny bits, but Potter — who rides the bus with her service dog — is concerned about the risk the glass might pose.

"It does worry me about the glass being on the sidewalk and whatnot. They haven't cleaned it up,” Potter said.

The scene is repeated a couple of blocks away on Farrah Road and on Oxford, near Guildwood Boulevard.

Some LTC riders estimate almost a dozen shelters were hit. 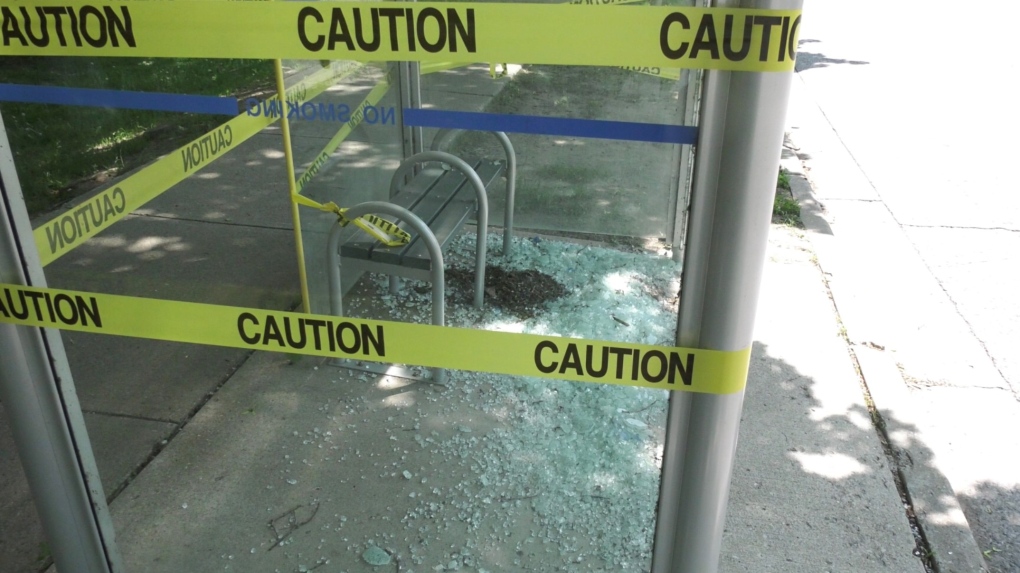 A bus shelter located on Proudfoot Lane in London, Ont. is seen on May 30, 2022 damaged, after its glass windows were shattered. (Gerry Dewan/CTV News London)One of the biggest concerns for transit riders is that the shelters will be removed completely, leaving them out in the cold during the winter.

Brian Cloney is one of those riders that doesn’t wan’t want to lose the shelters.

"LTC are basically going to probably say, 'Well, look we're spending all this money constantly rebuilding these shelters' and because it costs more money they're probably going to stop doing it,” he said.

He also worries about those with mobility issues who are waiting for a bus in the heat.

“Like seniors that probably use a walker, right, or a cane. They get tired very easily, right. So they want to be able to sit down and catch their break," Cloney said.

The London Police Service (LPS) said to this point they've only received one formal report regarding bus shelter damage, adding that the LTC will often file reports when a number incidents have accumulated.

LPS Const. Sandasha Bough said someone who is found responsible for multiple acts of damage could face significant charges.

"An individual who is found to be responsible for damaging property could face a charge of mischief, under $5,000 or over $5,000, depending on the cost of the damages,” she said.

CTV News London reached out to the LTC to determine how many incidents have been reported and when they anticipate the glass will be cleaned up but, as of Monday evening, have not responded to our inquiry.

Amid global turmoil, superyachts are selling more than ever. Here's why

Despite global conflict lurking on the horizon and energy prices putting the squeeze on millions, superyachts are selling more than ever. CTVNews.ca looks at why new superyacht owners are taking the plunge.