'I could feel the heat coming through the window': Residents flee downtown fire

'I could feel the heat coming through the window': Residents flee downtown fire

London police have made an arrest after a downtown high rise building was damaged and two vehicles were destroyed by fire.

The suspicious fire happened on the south side of the Picton Street building facing Queens Avenue, forcing some residents to evacuate.

Police have labeled it an arson investigation.

It was about 3 a.m. Tuesday when first floor resident Joesph Francis said he was awoken to flames coming from an exit to an outdoor recycling area next to his unit.

“It was actually pretty terrifying. I could feel the heat coming though the window,” said Francis.

A heritage row of townhouses also shares the same property. Two cars that were damaged were owned by residents of the properties.

One resident told CTV News she was woke up to sounds she later realized were her tires popping. Moments later police were banging on her front door telling her to get her family out. 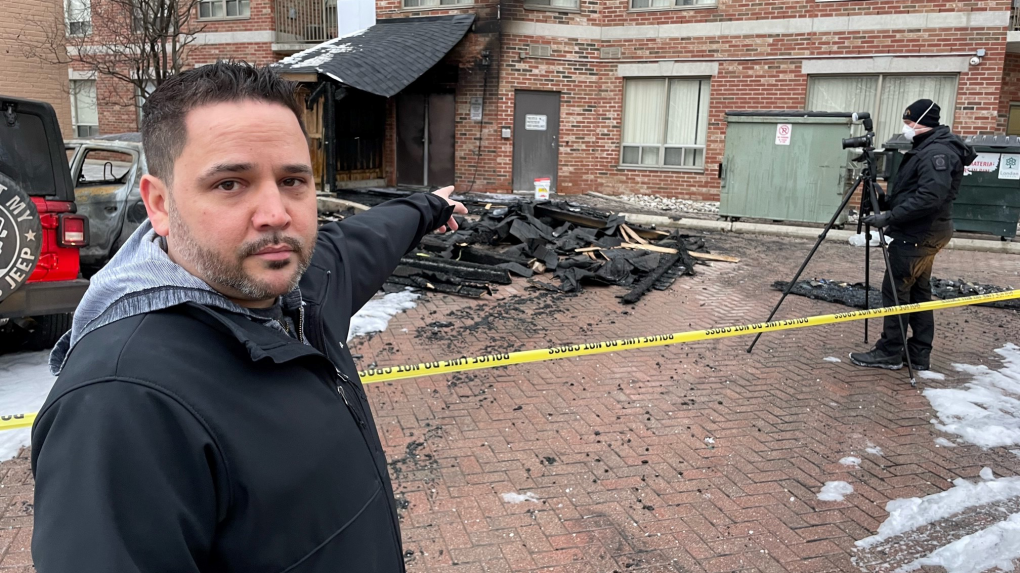 Joesph Francis points to a fire scene outside the window of his high-rise building as a London Police officer investigates. Jan. 24, 2023 (Sean Irvine/CTV News London)

Another couple in the heritage town homes, Jessica and Ryan Segui lost their Jeep to the fire.

While saddened to lose a vehicle they had saved up for, they remain thankful there were no injuries.

“It sucks, but glad nobody not got hurt,” said Ryan.

“It was chaotic but we were able to get all our animals and us out safe so that’s the most important thing,” Jessica expressed.

Tuesday morning police investigators had taped off the area.

Residents said it’s an eerily similar scene to a fire in the same spot two years ago.

Now, with a second blaze, residents are frustrated to hear it is being investigated as arson. They say the fires coincide with other concerns.

“We’ve have our vehicle been broken into a couple of times since we’ve lived here. Our windows smashed”, one shared.

The ongoing concerns are enough for Francis to consider leaving the downtown.

He says he doesn’t want to see flames out his window for third time.

“I’m not going stay here forever, that’s for sure. I’m done with it.”