ST. THOMAS, ONT. -- Residents in the municipality of Central Elgin, Ont. are fed up over rising water rates.

"We're not asking for cheap water, we just want to be able to turn on the faucet and not get a $200 bill," says John Oliveira, a Port Stanley, Ont. resident who has started making lawn signs to express his frustration.

The signs read ' Stop the Madness Central Elgin' with a general prohibition sign through the words water rate increase. 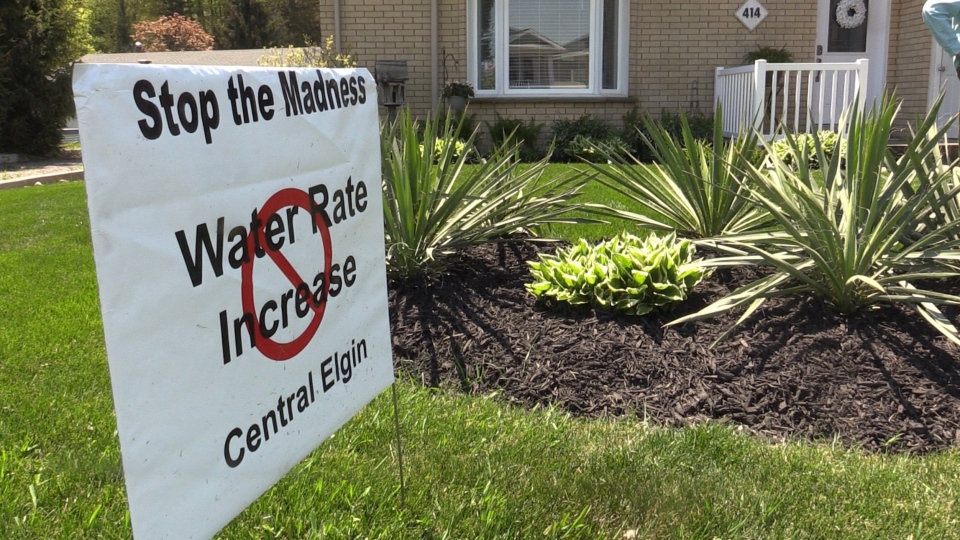 "Bills have gone up 60-70 per cent in recent years," says Doug Fiveash, a life-long resident of Port Stanley.

"We're paying double the rates of London and about three times what some municipalities are paying. There's no transparency from our municipality and they're not giving us any answers."

Central Elgin Mayor Sally Martyn says the municipality is in debt millions of dollars after upgrading 35 kilometres of water mains to keep the water safe.

We borrowed money for all those things and that's because the water wasn't safe," says Martyn.

With no money in reserves Central Elgin borrowed from Infrastructure Ontario on a fixed rate.

"We have to pay that money back and we have no choice," says Martyn.

The residents are frustrated that debt is now being passed onto them.

"It works out to about $700 a year, about $60 a month added on to everyone's bill before there's any water consumption or any wastewater charges," says Cathy Warwick, a Port Stanley resident.

Oliveira says he's angry at the lack of transparency and mismanagement from council.

"They said they were going to change the billing to monthly to lower the burden on our big bills every two months," says Oliveira.

"It is actually costing us more now because they increased the base charges, both in the water intake and the sewage. We have to really be careful how much water we use. My grass is green right now but it won't be like that, in a summer because I can't afford to water the lawn."

Martyn says one reason for the sudden increase in rates is due to the pandemic.

"Last year due to COVID-19 we froze the rate so it was probably a mistake to do that," says Martyn.

"That meant the jump was twice as high this year over last year. I know many people are complaining that we're much higher than all these urban areas and that's true. We don't have apartment buildings, we have row houses and you have very long water mains, between others because and large lots and with fewer residents to pay for it. Some of the borrowing will come off in 2025 but will take till 2035 to pay back all the money we've borrowed to replace the infrastructure and the ground to keep the water safe."

Many of the residents have taken to Facebook and formed a group called 'Accountability For Central Elgin-Water. They hope to have their voices heard before Tuesday's Central Elgin Water and Wastewater Budget meeting.

"These are actual concerns of people," says Warwick.

"Many of the letters are coming from new residents. Those moving here need to know as well. Some of them are getting water bills of over $800 and $1000. Central Elgin is a great place to live and we love it here. The fight wouldn't be as hard, if we didn't care and maybe all of us together can do something about it."