'I am not locked down this morning': Charges laid as defiant Ontario church sees hundreds gather for service

LONDON, ONT. -- The pastor of a small Ontario town church was greeted with a standing ovation as hundreds gathered for an outdoor service Sunday after their church was shuttered by a court order last week.

“I am not locked down this morning,” said Pastor Henry Hildebrant of the Church of God Restoration in Aylmer, Ont. as he started the service attended by roughly 500 congregants.

With a population under 8,000, Aylmer is located about 40 minutes southwest of London, Ont. and often doesn’t attract much media attention.

However, that has not been the case during the pandemic as the church and its pastor have been repeatedly charged with violations of the Reopening Ontario Act leading to national coverage of the ongoing disputes.

During the Ontario stay-at-home order, religious, wedding and funeral services are limited to 10 people indoors or outdoors. Drive-in services are permitted.

On May 14, it all came to a head when a judge ordered the church doors locked after it was found in contempt last month.

In his decision Justice Bruce Thomas said, "The evidence makes it clear that Pastor (Henry) Hildebrandt has control over his congregation…as pastor of this church, (he) is the leading force and unapologetic spokesperson for this offending activity.” 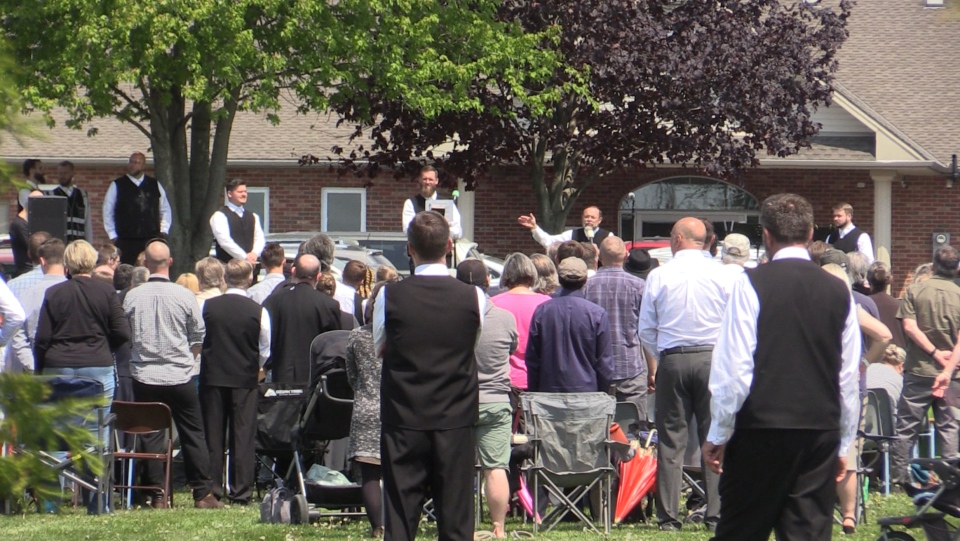 During the pandemic the church has continued to hold Sunday services despite repeated charges under provincial COVID-19 regulations and while the doors may have been locked Hildebrant and his congregants showed how willing they are to keep going Sunday.

"So far there is no invention of locks that locks God down, or his people," said Hildebrandt.

He called the warm weather a 'gift' because they couldn't have put the large crowd inside the church.

"We are having a God-given freedom rally this morning", says Hildebrandt.

Throughout the morning he took shots at the mainstream media, the law system and the fines imposed by the courts.

After the service, they invited people for lunch which they prepared for '1,000 people' according to Hildebrandt.

Police were on scene at a distance and released the following statement Monday morning:

"On Sunday, May 16, 2021 Aylmer Police monitored the activities at the Church of God Restoration situated at 751 John St. North Aylmer, Ont. Police obatined footage of a large gathering and a makeshift outdoor church stage and seating area set up for the service. Police counted in excess of 200 vehicles and 400+ persons in attendence. This is following a recent court ruling where the church was ordered locked and substantial fines levied against the Church, the pastor and the assistant. Charges against the organization and those identified as organizers and active participants are pending. Aylmer Police will actively pursue further options to ensure compliance with emergency orders of this particular church and participants in order to protect the community from harm"

The Church of God Restoration is charged with Corporation - fail to comply with a continued section 7.0.2 order.

Meanwhile a constitutional challenge from the Church of God Restoration, along with Trinity Bible Church in Waterloo and the United Reform Church in Wellandport is set to be heard on Oct. 4 in St. Thomas.