CORBETT, ONT. -- A Huron County man who saved a woman’s life is being recognized by his community with a citation.

On Oct. 1, Jake Johnson put out a raging car fire on Mount Carmel Road in the village of Corbett, in northern Middlesex County.

He did it just in the nick of time.

Arriving at the scene in his dump truck, Johnson noticed smoke coming from a wooded area, and another passerby asked if he had a fire extinguisher.

He and another man then quickly tried to put out the fire out.

Initially they did not realize the situation was desperate and life-threatening.

“We were putting it out with the extinguisher, and we weren’t in too much of a hurry thinking there was nothing in there. We could not hear anything. And then we heard the lady scream from the inside, then we realized there’s someone in there.”

With three extinguishers exhausted, and the fire still burning, Johnson had to think fast.

“It was scary at a couple of points there, but failure was not an option at this point, I did not care. We were going to do everything possible to stop it!”

Within moments Johnson quickly decided to move his dump truck and extend its belt arm. He then sprayed sand directly onto the engine compartment.

The fire was extinguished as the first emergency crews arrived.

Crews were able to free the woman from the car and she was taken to hospital via air ambulance. A few minutes later, as CTV News cameras captured, there was very little left of the vehicle.

“This is just heroic. It meets all the criteria I see,” states George Finch, the mayor of South Huron.

Finch, along with South Huron Fire Chief Jeremy Becker, have presented Johnson with a commendation. 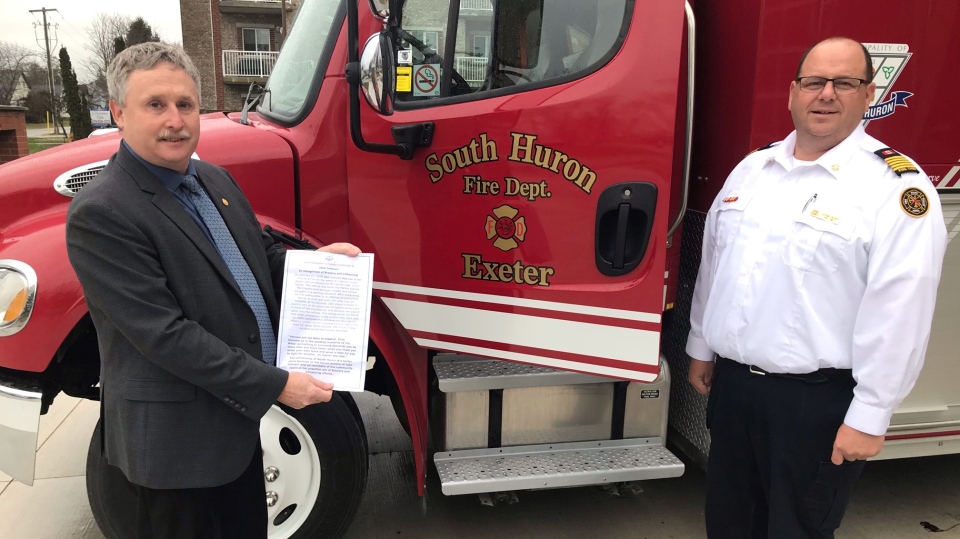 South Huron Mayor George Finch, left, holds a copy of a citation given to Jake Johnson, who saved a woman from a burning car. He is joined by South Huron Fire Chief Jeremy Becker on Monday, nov. 30, 2020. (Sean Irvine / CTV News)

Becker says it’s the least they can do given the possible outcome Johnson prevented.

“It could have definitely been a fatal accident.”

Becker says the actions Johnson took serve as a reminder to the public to be prepared to come upon an emergency.

“Anything to slow the process down, or mitigate the risk all together, is definitely beneficial.”

Even though fire extinguishers failed to help in this case, all three men says they are important to carry in a vehicle.

As for Johnson, he’s happy to hear the woman injured in the crash is back up and walking, although she faces more surgeries.

He hopes to meet her face-to-face one day to offer them both closure.

Looking back, he believes faith and fate brought them together.

“I have to put an angel on that one. Cause it was right time, right place, right material, right conditions. It’s the only way I can explain it.”

Johnson also hopes his interview with CTV News will help identify the other man who tried to help him at the crash scene that Thursday afternoon.