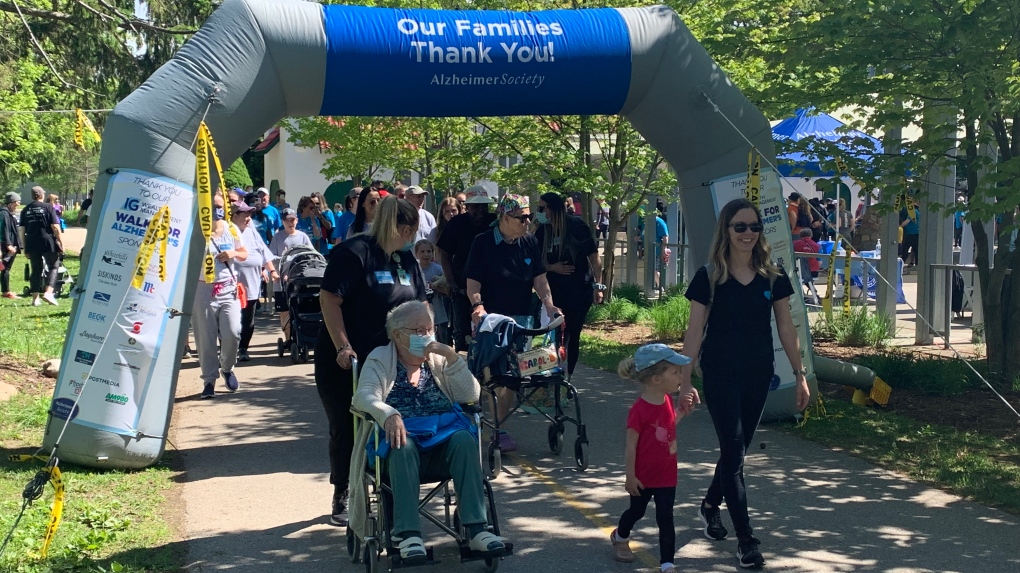 Hundreds of people were walking for the Alzheimer’s Society of Southwestern Ontario around the London, Ont. region on Saturday, May 28, 2022. (Brent Lale/CTV News London)

Tony Paul had a hard time putting words together when speaking about his late wife Susan.

Paul was one of hundreds in four locations in Southwestern Ontario walking to raise money for Alzheimer’s Society Southwest, which helped him through his journey before Susan passed away less than two years ago.

“She was very young, 67, when she passed away. So it was gradual at first and then took a real down spike near the end for the last couple of years.”

“It’s important to keep the program's going for 13,000 people in this vicinity that are in need of support for Alzheimer's and other dementia,” says Paul.

There is no cure as of yet, and each year they hope to gain ground, but find the disease is more complicated than originally thought.

Pasternak believes there will be close to a million people living with Alzheimer’s and Dementia in the near future, and doesn’t believe the hospital system is ready.

“We have nice places in London (that) have multi-year waiting lists. Our medical system is already overwhelmed,” he said. “We desperately need to have some sort of treatment that actually helps. And we have treatments that help a little bit. We can take some of the edges off, but we don't actually have anything that can fix anyone.”

Pasternak says the disease affects not only the patient, but their families and caregivers.

He’s excited to be taking part in the walk, and seeing programs return because COVID has been devastating for patients who lost services.

“It's been more devastating for caregivers who have had all of the all of the escapes shut down,” says Pasternak.

“A patient and a caregiver like literally have nothing to do and they are locked together. And so you know the incredible mental health strain on caregivers has just been unbelievable.”

Those wishing to donate to the walk can do so here.