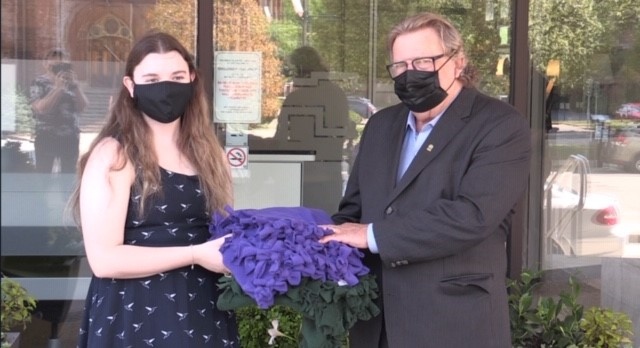 A London teen who donates “hug blankets” to people requiring comfort— is providing her special kind of support to the Muslim community.

Mayor Holder will deliver the blankets to the London Muslim Mosque, “We could all use a hug, and if there’s ever a time we could use one, it’s absolutely now.”

Vickers hopes one of the ‘hug blankets’ will eventually offer comfort to 9-year old Fayez Salman, who is still recovering in hospital.

The donated blankets are green and purple, the same colour as the ribbons being tied outside the London Muslim Mosque.

The 16-year old developed “Hope’s Hugs” several years ago to represent a comforting hug to someone who is in need.

They have been sent across Canada during times of tragedy, including to the survivors of the Humboldt Broncos bus crash.

Vickers says she wants Londoners who are grieving to feel the comfort of a hug even if the pandemic requires personal distancing.

“People really need hugs in times of need, especially now.” She says. “With these today, I’ve given over a thousand blankets during the pandemic because there is so much need.”

Hostage negotiation experts say time is the greatest issue facing the FBI and government officials in rescuing 17 members of a U.S.-based missionary group, including one Canadian, who were kidnapped over the weekend by a violent gang in Haiti.

Queen Elizabeth II has reluctantly accepted medical advice to rest for a few days and has cancelled a trip to Northern Ireland, Buckingham Palace said Wednesday. The palace didn't offer specifics on the decision, but says the 95-year-old monarch is 'in good spirits.'

Statistics Canada says the annual pace of inflation picked up in September to reach its highest level since February 2003.

Laila Goodridge, the newly elected Conservative MP for Fort McMurray—Cold Lake, says changing the narrative around Canada's oil and gas sector is of utmost importance to her as she takes on her new role in Ottawa.

As Montreal police continue to investigate the city's 25th homicide -- and second fatal stabbing in two days -- videos are circulating on social media that mock the 16-year-old victim.

The Newfoundland and Labrador government is moving ahead with plans to drop the word "savages" from the official description of the Indigenous people depicted on the province's nearly 400-year-old coat of arms.

For the first time, a pig kidney has been transplanted into a human without triggering immediate rejection by the recipient's immune system, a potentially major advance that could eventually help alleviate a dire shortage of human organs for transplant.