On Thursday, the London Police Services Board received the 2020 Annual Report on policing, including average response times to 911 calls.

The highest priority calls (Code 1), life-threatening emergencies, now take an average of nine minutes between calling 911 and the arrival of a police officer.

Urgent calls of a non-life-threatening crime in progress now takes two hours and 44 minutes on average, and the response to non-urgent calls averages over 13-and-a-half hours.

“The nature of the calls has changed,” explained Betts. “The complexity has increased, and it's part of an overall increasing degree of complexity in the justice system.”

Since 2011, the average time spent on each police call has risen 27 per cent, to two hours and 41 minutes. 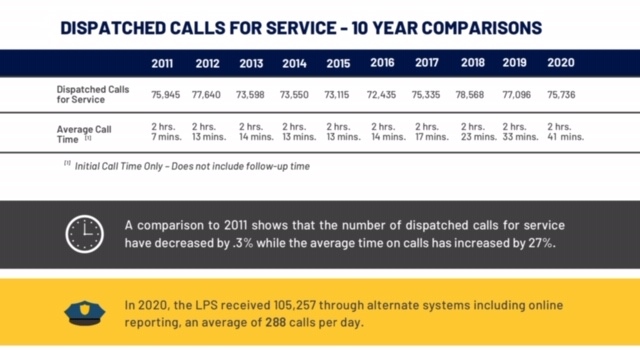 The LPA says the situation is taking a toll on officers.

The nine-minute response for “lights and siren” emergency calls represents the time between a 911 call is placed and an officer arriving on scene, including two minutes and thirty-five seconds (average) that the caller speaks to an operator before police are dispatched. 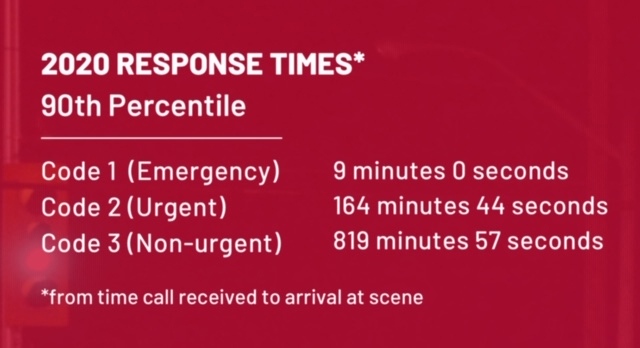 Unlike fire and ambulance service, there is no target for police response times.

Betts says in part that’s because police are dispatched from vehicles in the field rather than neighbourhood stations.

Betts and Robson agree that speeding up response times will require system-wide change.

“Unless there is a change from police being the front line for mental health and other social ills, the only other answer is more resources,” says Robson.

“Quite frankly, adding more officers will make an impact, but it won’t make a defining impact,” explains Betts. “There are more things we can do like adding technology that will allow us to be in the right place at the right times.”

Liberal Leader Justin Trudeau says while he's not in the position to judge Alberta's approach to containing the spread of COVID-19, the crisis there is proof that 'leadership matters.'

The government of Alberta has joined other provinces across Canada in announcing a proof of vaccination program as COVID-19 cases continue to soar to well over a thousand per day.

UPDATED | Father abducted after violent home invasion in Hamilton, Ont. that left one son dead, another injured has been found

A man who had been abducted early Thursday morning has been located hours later following a shooting and home invastion that left one of his sons dead and the other in critical condition, Hamilton police say.

Liberals and Conservatives tangled in a tie in the final days of campaign: Nanos

As the clock ticks down toward Election Day, neither the Liberals nor the Conservatives have managed to secure a comfortable lead and the two parties remain tangled in a statistical tie, according to the latest polling data from Nanos Research.

Ontario health officials are reporting more than 800 new cases of COVID-19 and three more deaths due to the disease.

An Indigenous community on the Manitoba-Ontario boundary is welcoming clean, running water for the first time in nearly 25 years.

Thousands of Canadians will not be able to vote in the upcoming federal election because of the COVID-19 pandemic, Elections Canada said.