Home is where the art is, Grand Theatre seeking help

It’s a behind-the-scenes part in theatre that most theatre-goers don’t think of. The role of the billet.

“As soon it became possible and opened up again we wanted to do it,” said Kevin Bice. He and his wife Daphne have been hosting Grand Theatre performers and production team members for about 20 years now.

With productions resuming, the Bice’s are opening the doors to their home again. “We love doing it because it’s a way to get involved with the theatrical community and the arts community in London and we just think it’s a community that needs support here.”

But there’s been a dramatic drop in available homes, with the Grand losing about 80 per cent of its billet spaces.

“There is a peak point during this winter when we will need over 30 beds for visiting actors and designers, choreographers, et cetera,” says Grand Theatre Company Manager Lauren Rebelo.

Rebelo helps arrange stays for those who are taking part in performances. She says there are a number of factors contributing to the shortage.

A small number of people have concerns about inviting others into their home during the pandemic. Some were snowbirds who would travel south and offer up their home while they were away, but now they’re not making the trip. Others have sold their homes, taking advantage of the red-hot housing market.

Rebelo says those factors have created a challenge for the theatre, “People have no idea. This is such an integral part of the process, it’s truly how we continue to get the most exceptional talent to our stage and into our city.”

So the call has gone out for others to step forward, offering up a space to stay for anywhere from one to eight weeks.

The ideal situation is for the Grand is to have spaces within walking distance of the theatre. 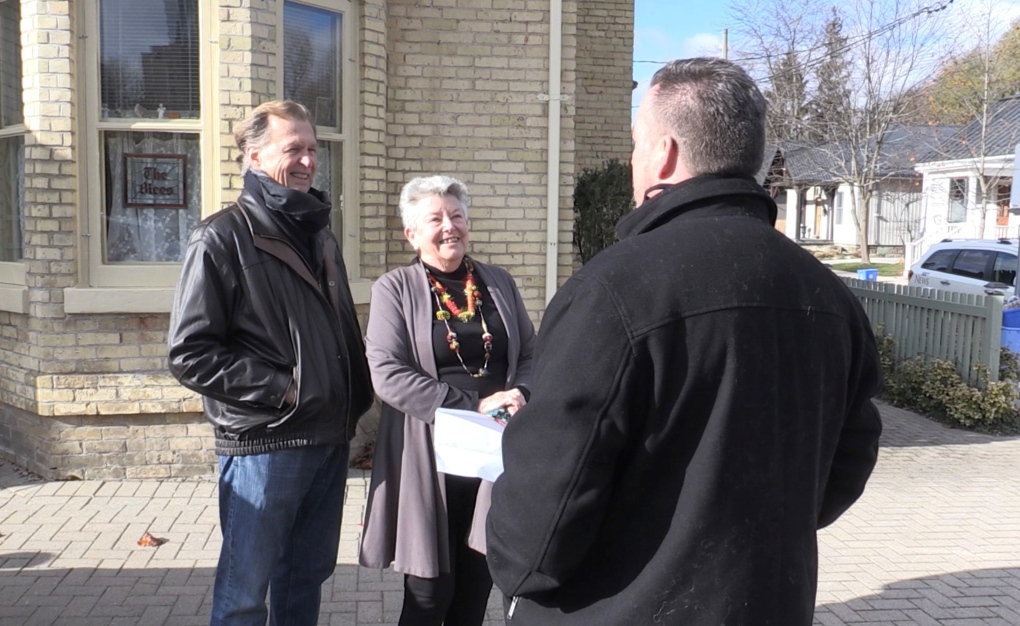 Kevin and Daphne Bice speak with CTV London's Gerry Dewan, Nov. 23, 2021.Daphne Bice says the couple currently have a 24-year-old assistant stage manager from Toronto staying in their home, and it’s her first trip to London

“It’s fun, too, to include her in our weekend suppers when she’s not at the theatre. It’s a delight to have a young person in the house and new conversations.”

An actor from an upcoming performance is already booked in for the coming weeks. But the Bice’s also had to turn down another performer because of an overlap in productions.

The Bice’s are hoping others will step forward to support the theatre.

Rebelo adds, “From that point we always have two sets of artists in the building at one time.”

She says the real test comes in February and March, “When we have ‘Control Damage’ and ‘Grow’ in the building at the same time.”

She says it’s important to keep in mind that performances open London up to the world, “We have an artist with us right now from Memphis and soon some of our ‘Room’ team will be coming from the UK.”

Rebelo believes the billets play a significant role in helping spread the word about the quality of the arts in London.

A hand surgeon testified Monday that Johnny Depp could not have lost the tip of his middle finger the way he told jurors it happened in his civil lawsuit against ex-wife Amber Heard.

Hydro Ottawa says the damage from Saturday's storm is "simply beyond comprehension", and is "significantly worse" than the 1998 ice storm and the tornadoes that hit the capital three years ago.