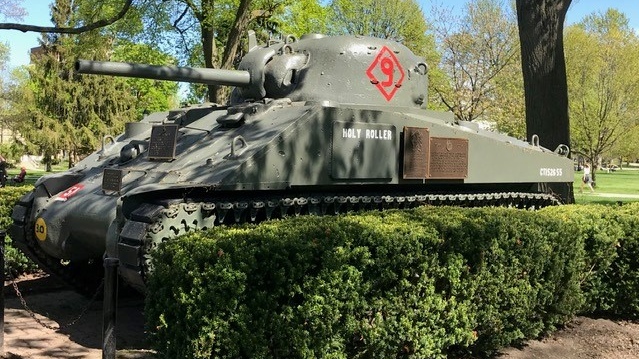 LONDON, ONT. -- The future of London’s famed ‘Holy Roller’ tank is on the agenda at City Hall next week.

A city committee will take a look at a project to restore the tank, located in Victoria Park.

The 'Holy Roller' tank is famous for surviving D-Day and through until the end of the Second World War.

It has been on cement pad in Victoria Park since 1956.

It honours the soldiers of the 1st Hussars Regiment, who fought in various campaigns.

But now, it’s in rough shape.

Vandalism and break-ins have also taken a toll, especially on the floor of the Sherman tank.

Now, the 1st Hussars wants civic permission to begin a public campaign to raise funds for its restoration.

The regiment acknowledges its a tough time to ask for help, but it expects private corporate donations will help the effort.

Retired lieutenant-colonel Ian Haley says the Hussars will not be formally asking the city for any money.

He further remains hopeful the pandemic will subside before the project begins.

“The plan at the moment is that in 2021 it will come off the pad. It will go into a workshop and we hope to have it back in time for the 150th anniversary of the regiment in June 2022.”