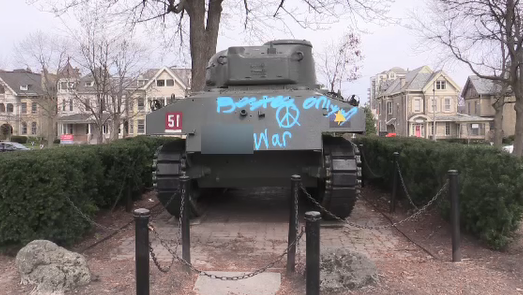 The ‘Holy Roller’ tank in London, Ont. Victoria Park was vandalized in the early morning of Saturday Apr. 3, 2021. (Brent/CTV News)

It was discovered by Grant MacDonald who tweeted a picture of the graffiti to the London Police Service (LPS).

"We're disappointed," says Retired Lieutenant-Colonel Ian Haley, the project director for the restoration of the tank which has been in the park since 1956.

According to Juno Beach Centre, the 1st Canadian Armoured Brigade (CAB) was equipped with Shermans in time for the invasion of Sicily in July 1943.

"A lot of good people died so that people can demonstrate their opinion but they should take it out on the government not on the veterans," says Haley.

"We thought that people had got beyond this, that they should we say, they've grown up. But people will still do it."

LPS Deputy Police Chief Stu Betts responded to the tweet by saying it's "Very sad to see such desecration!"

The LPS then tweeted asking MacDonald to file a report with police.

Haley believes the majority of Londoners support the 'Holy Roller' and its restoration.

"When it comes back after it's been preserved and restored, then we'll make sure that it's got appropriate safety measures around it," says Haley.

As of Sunday morning the ‘Holy Roller’ tank was graffiti free.

Good news as of Sunday morning the graffiti on the Holy Roller has been painted over. #1stHussars #HodieNonCras pic.twitter.com/GWOQmq8fR6