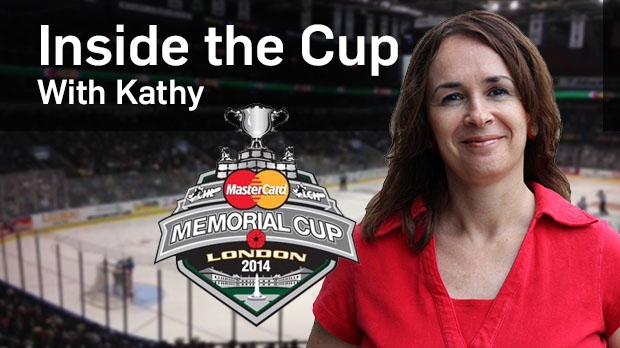 The patriarch of Lambton County's first family of hockey, Dick Hunter, says his sons, London Knights GM Mark and head coach Dale, are used to pressure and will remain calm despite having a heck of a route now to win the Memorial Cup.

"Mark and Dale (who also own the team) never get nervous. They've played in the Stanley Cups. You know the pressure there. You can't show too much because the kids get all nervous, so you try to keep it calm," dad Dick Hunter says.

After going 0-2, the Knights must win Wednesday against the 2-0 Guelph Storm to force a tiebreaker.

It's an uphill battle at best and Dick will be there to offer support.

He never misses a London Knights game and he just may be the most popular man around the organization.

Dick coached his sons in minor hockey on their way to NHL glory.

After years of having an in to any NHL game he wanted, being pals with Don Cherry, celebrating Stanley Cup successes with two of his sons, including Dave, and now watching the Knights play host to their second Memorial Cup (no other club has been awarded the Cup in such a short time span in CHL history), it's a ride he finds hard to fathom.

"Wow. How could this happen? It's quite an honour," Dick says.

He tries to explain the success his family has enjoyed in the high-pressure world of professional hockey and now its second go-round at junior supremacy.

"The reason they've had such success? Hard work. That's the biggest thing is hard work," he responds.

And it helps that his boys were under the tutelage of top coaches, including Terry Crisp and Glen Sather.

"I'll tell you, they've played for some great coaches," although Dick declines to name any because he doesn't want to single out anyone. "I don't want to hurt anybody."

"Give them ice time," he says. "Back in them days, that was the thing. Just throw them out and let them go and the best will come out of them.

"I used to talk to Billy Long when I coached quite a bit," he continues.

(Long won OHL coach of year with the Knights in 1977 and the league named its lifetime achievement award after him.)

Long's reply: "Dick, I open the door and let them on the ice and the best will come out of them."

Dick says despite the pressure of trying to win another Memorial Cup for London, his sons aren't feeling it.

And what will the they be telling their players now? "You do the best. That's all you can do. That's what the boys tell the players, you've got to do your best."

And hope for some luck. "Breaks mean a lot," Dick says.

I asked Dick, what the family talks about besides the game?