Highrise rules: How tall is too tall around Victoria Park?

LONDON, ONT. -- A controversial proposal to build a highrise overlooking Victoria Park may be scuttled by city hall’s latest proposal to limit the height of buildings surrounding the downtown oasis.

After a contentious public meeting last year, the planning department has revised the proposed Victoria Park Secondary Plan intended to lay out rules for development along the park’s perimeter.

The revisions include a so-called 45 degree angular plane to limit the height of new buildings next to houses in the West Woodfield Heritage Conservation District near the northeast corner of the park.

Planner Michelle Knieriem says the goal is to find balance between the needs of developers, the Woodfield Heritage Conservation District and visitors to Victoria Park.

“The park is very important and that has helped to guide a lot of policies in our plan, but that transition to the low-rise development in the West Woodfield Conservation District is also extremely important.”

The angle plane would establish an imaginary line starting 10.5 metres above the property line of houses on Wolfe Street, and extend at a 45 degree angle upwards towards the park. New construction could be no taller than that line. 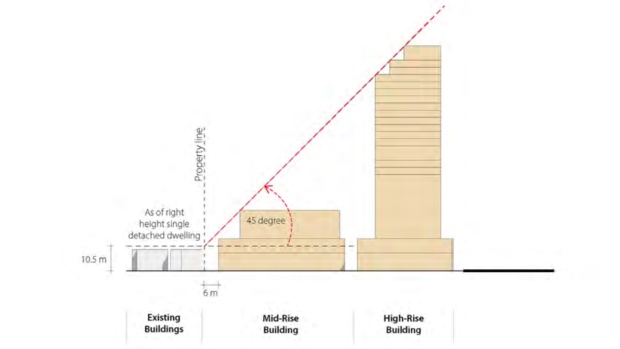 The organization Friends of Victoria Park opposes Auburn Developments’ proposal to build a 22-storey highrise at 560-562 Wellington Street over concerns it would negatively impact the park.

The 45 degree angle plane would effectively limit development on the property to approximately eight storeys.

“Eight stories certainly falls into the parameters that we were hoping for,” says Friends co-founder Mary Ann Hodge. “There is a sweet spot of middle density that we are missing here in London and that is a golden opportunity because that really provides more of a community.”

But Auburn Developments’ Steve Stapleton tells CTV News that the changes to the Victoria Park Secondary Plan only confirm the status quo and, “completely renounce any development potential for our site and in fact staff's position wouldn't enable the current office building at its five-storey height."

Stapleton adds neighbourhood compatibility extends beyond a building’s height, “What must be determined and characterized is the adjacent areas and the sensitivities and impacts of height. This was not done." 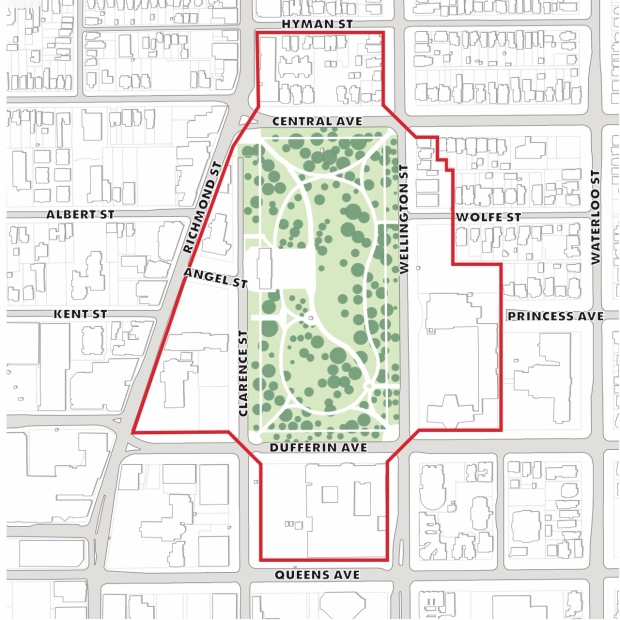 President Jennifer Grainger says, “This does seem that the city has been listening to our concerns and that there is a compromise going on between the need for heritage preservation and the need for newer buildings."

The Friends of Victoria Park still have concern about 30-storey maximum heights being proposed at Centennial Hall, City Hall and next to the Canada Life building.

The revised Victoria Park Secondary Plan will be the subject of a public participation meeting at city hall on Monday.