Some wild weather ripped through London and the surrounding counties late Wednesday afternoon and into the evening hours taking down trees and knocking out hydro.

Environment Canada issued a tornado warning just before 4:30 p.m. for London and eastern Middlesex County. The warning eventually spread to areas east and west of the city.

So far there have been no reports of injuries because of the storm.

However, high winds and hail have knocked down trees across the region, causing some damage to homes and vehicles.

An elderly woman made it out of her Daleview Crescent home in the northeast end of town after a willow tree came crashing down on it.  She was unhurt.

On Baker Street in Wortley Village the wind knocked over several trees and power lines and neighbours say it was a frightening ordeal.

The tornado warning for London was lifted shortly after 6 p.m., but some thunderstorm watches and warnings continued.

There were numerous reports of power outages and lightning strikes, which are likely to keep fire and hydro crews busy into the night.

There have also been unconfirmed sightings of funnel clouds touching down throughout the region, but Environment Canada has yet to confirm anything. 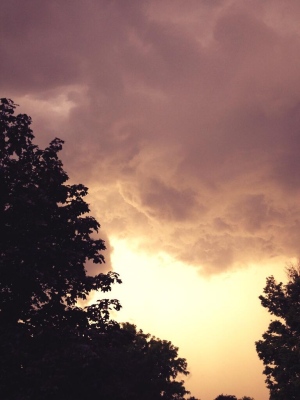