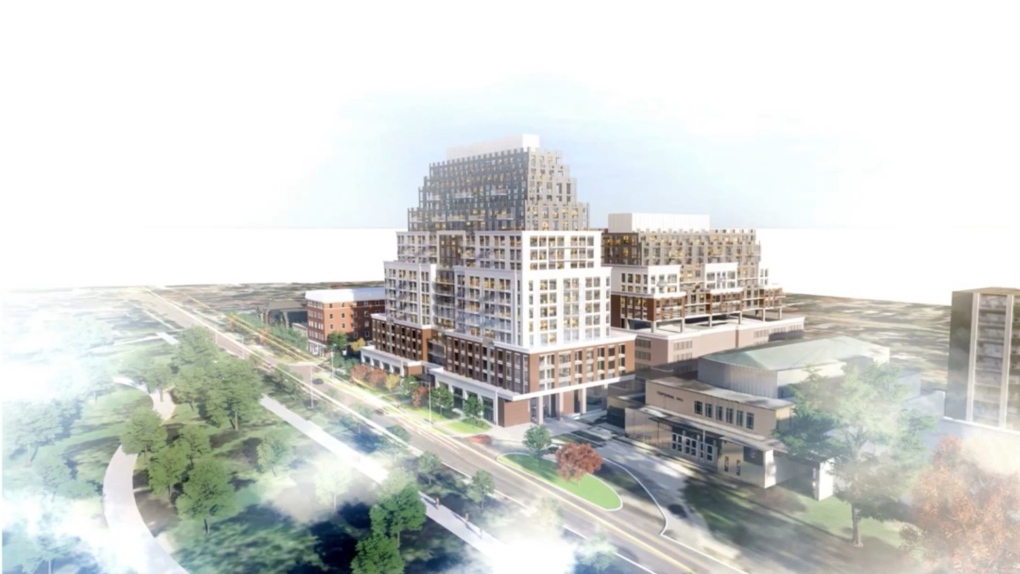 A concept drawing of the proposed towers adjacent to London’s Centennial Hall.

LONDON, ONT -- The London Advisory Committee on Heritage (LACH) has given a “thumbs down” to a plan to build two highrise buildings, across the street, from the east side of Victoria Park.

That address is 556 Wellington St., next to Centennial Hall.

At a meeting Thursday evening, LACH members stood with a Victoria Park advocacy group and backed the recommendation of the city’s heritage planner.

The recommendation partly states the 12- and eight-storey buildings, as proposed, would be “entirely at odds with the character of the West Woodfield Heritage District and adjacency to Victoria Park.”

The structures feature an ascending design, with plans for a mix of more than 400 units and a street level shops.

As proposed, it fits within existing zoning on the property. But, neighbours, and the group Friends of Victoria Park don’t like it. They say it would sit too close to century old homes and the Woodfield Heritage District.

Co-founder of the group, Mary Ann Hodge, told CTV News Thursday evening, she’s pleased to now have, not only the support off the city’s heritage planner, but LACH as well.

Following the meeting, LACH Chair, Derek Dudek stated he’d been hopeful the plans for the building - he first saw in late 2019 - would have changed enough to gather support. But ultimately he says LACH members were disappointed.

“The building had to go through a number of iterations since we last saw it, and the heritage evaluation, by their consultants. But ultimately none of the issues that we were concerned with back in December when we first saw it, we’re addressed.”

Dudek says the design would fit better if it sat on the opposite side of the park, towards Richmond Street.

“I personally support that, and I think LACH has been a little bit more understanding of that. But I think when we have these higher buildings being proposed, particularly on the side that is next to west Woodfield, that where we’ve had more concerns as opposed to Richmond Row.”

The city continues to work on the Victoria Park Secondary Plan, which will set building heights and size limits for all properties surrounding the park.

Started in 2018, it remains incomplete.

- With files from CTVs Daryl Newcombe