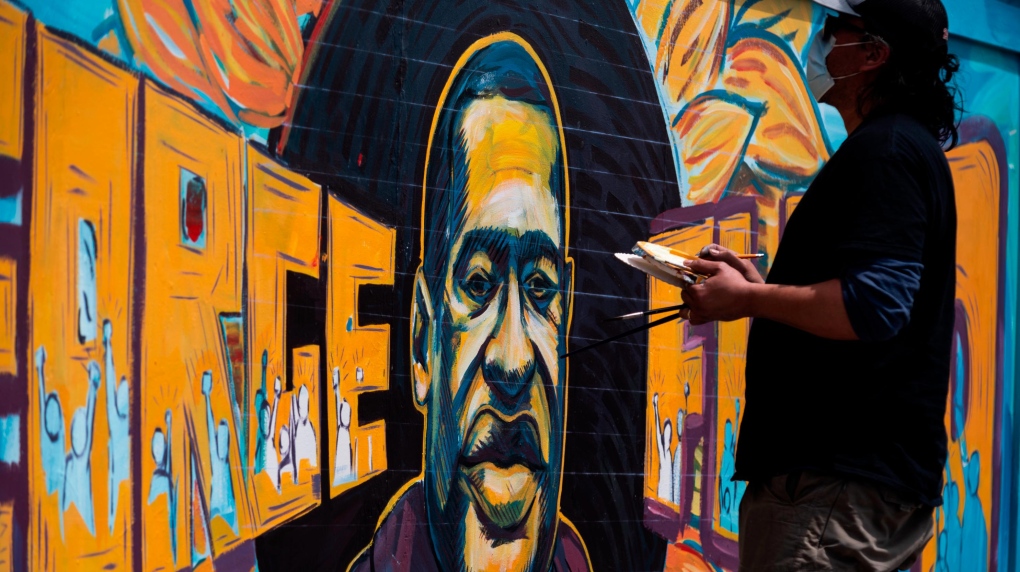 A group of artists paint a mural of George Floyd on the wall outside of Cup Foods, where Floyd was killed in police custody, on May 28, 2020 in Minneapolis, Minnesota. (Stephen Maturen/Getty Images North America/Getty Images)

LONDON, ONT. -- The Black Lives Matter rally slated for Saturday at London, Ont.’s Victoria Park will be attended by local health officials and the police union.

He says with his colleague in the park, he’ll be there but not among the protesters.

“I’m going to go to the event in my car. I’m going to stay in my car and bring my three daughters to make sure they understand what’s going on. The meaning, what their role is in terms of addressing anti-black racism. And have a fulsome dialogue with them.”

Mackie is asking anyone who goes to the rally to monitor themselves for COVID-19 symptoms for 14 days.

He strongly recommends people keep a safe distance at the rally and use personal protective equipment to help prevent the spread of COVID-19.

Organizers are also encouraging a peaceful and safe event, asking attendees of the event to, "Wear a mask, stay 6 ft apart and if you are symptomatic stay home."

He added that members will attend the demonstration this Saturday.

“We want your trust and we hope by attending this peaceful gathering that we are in some very small way demonstrating our desire to earn it through action.”

He added that the hope is to “listen and learn” and “be part of the healing process,” and thanked the organizers for reinforcing the message that it is to be a peaceful demonstration.

(1/5) The London Police Association want to reinforce our condemnation of the killing of George Floyd in Minneapolis. It was brutal. It was grotesque. It was criminal. It was deliberate. It was racism.

We are taking the opportunity to join in a peaceful gathering...

(3/5) The intent of the gathering is to “support Canadian Blacks, Indigenous and People of Colour as well as Americans who face rampant police brutality and systemic racism.”

We are attending because we want to listen and learn. We also want to be part of the healing process.

(5/5) We also commit that attending this gathering is not the end but a beginning.

'Get your knee off our necks!': Floyd mourned in Minneapolis

Five charts that show what systemic racism looks like in Canada

How to be anti-racist: Speak out in your own circles

Floyd mourned, celebrated as death used as call to action

Police probe motive after officer stabbed in the neck in NYC