LONDON, ONT. -- A county councillor was unable to access Thursday night’s Board of Health meeting to ask questions about the equipment abandoned by the Middlesex-London Health Unit during a recent move.

“Go ahead Kelly...” said Chair Maureen Cassidy during the online Middlesex London Board of Heath meeting - but there was silence.

The Health Board meeting proceeded with a discussion of equipment left behind when the health unit moved out of the county-owned building at 50 King St.

“I did obviously did have concerns and questions about what was being discussed last night,” said Elliott.

But Elliott points out, without being connected to the online meeting, she couldn’t hear the answers, “I don’t know what the answers to those questions were, I don’t know if I have any follow up questions.”

Staff at the health unit are working to address the connectivity problem before the next board meeting.

But a Tweet, eventually deleted by Councillor Cassidy, tapped into simmering frustration.

It read, "Now I wonder, after all is said and done, how many of the critics actually tuned in to the live stream of the health board meeting tonight? All board members -county, city, province present - all questions and concerns addressed. Relocation update & report passed unanimously."

Elliott said, “It was unfortunate that was tweeted out as not everybody was present, obviously.”

Cassidy explains why she deleted the tweet, “It was accurate that everyone was there at the start of the meeting. I assumed that Kelly (Elliott) was watching or listening to the meeting, and obviously that was a wrong assumption.”

And as for the ‘critics’ who questioned why so much equipment was abandoned during the relocation, Cassidy is emphatic that her tweet was not referring to Elliott.

“I felt that people who were weighing in should have tuned into the meeting if they were curious about the entire story.”

And when asked if so-called ‘critics’ would be able to tune into the meeting from rural parts of the Middlesex County, Cassidy replies, “We had two other board members who live rural that were there.”

But this exchange was captured during the live stream when the Health Board’s vice chair, the mayor of Middlesex Centre also experienced connectivity problems.

Mayor Aina DeViet told Cassidy, “I could see part of the meeting you are in, I’m sorry I have heard nothing (unintelligible).”

Cassidy replied, “I’m sorry, because it’s a shame. As a county councillor it’s important for you to hear a lot of the things that went on.”

Elliott praises the efforts of IT staff, and says the situation highlights why internet connectivity remains a major challenge for rural Ontario.

The health unit posted a video of the meeting on its website. 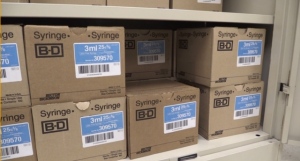