HARRISTON, ONT. -- The Maitland River is flowing slowly these days but that was not the case on June 23, 2017, when the river spilled its banks flooding over 150 homes.

Nearly a quarter of the town was under water, including Deputy Mayor Dave Turton’s house.

With 15 massive floods in the past 100 years, and temporary measures proving unsuccessful, the Town of Minto is planning on taking the bold step of literally moving the river around Harriston.

The proposed price tag is $38 million. 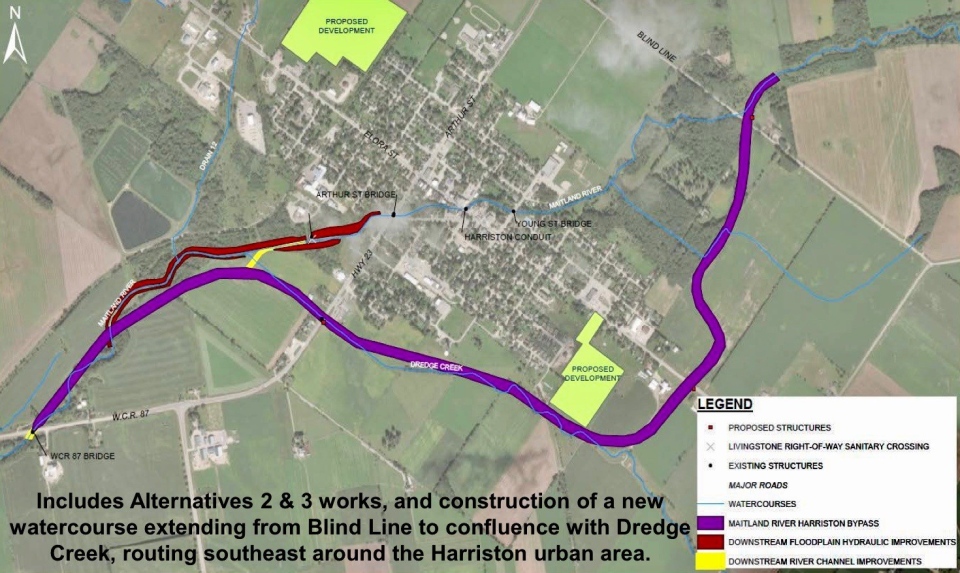 Plans to move the Maitland River around Harriston, Ont. (Source: Town of Minto)

“The only thing that actually takes the floodplain out of Harriston, is actually moving the river. So, that is the number one thing, down the road. If you’re going to spend all that money, you might as well have success at the end,” says Town of Minto Mayor George Bridge.

“There are people in town now, that cannot get flood insurance. So, it’s a serious situation,” says Turton.

Council’s $38-million plan to move the Maitland around Harriston won’t happen without financial support from both the federal and provincial governments, says Bridge, or without the support of the private property owners.

But right now, it’s the only solution to Harriston’s chronic flooding problem.

“I think both levels of government are looking at mitigation, not just putting a band-aid on this cut. They may want to get it all fixed up, so it doesn’t keep happening, over and over again. Because, when you keep adding up those numbers, over and over again, this maybe the cheap solution,” says Bridge.

“The flooding issue, is not as forefront as it is when you have a foot of water in your basement,” says Turton.

Bridge says they’re moving forward with the plan to move the river, and will make their case with upper levels of government for funding in the near future.