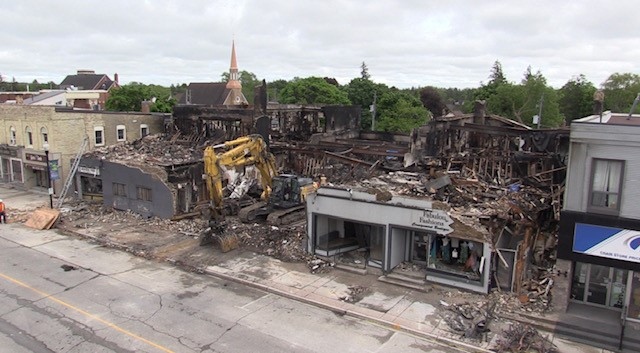 The burned-out remains of buildings in downtown Hanover, Ont. after a fire tore through multiple buildings on May 19, 2022. (Scott Miller/CTV News London)

The road closed sign came down on Hanover, Ont.’s Main Street this morning.

A large part of Hanover’s downtown has been closed since early Thursday morning, when a fire ripped through a century old hotel-turned rooming house and two attached businesses.

In total, 54 residents were left homeless following the fire and two businesses were destroyed. No one was seriously injured in the fire, but some pets did perish.

Hanover’s Main Street has been closed for demolition and an investigation into the cause of the fire by Ontario’s Fire Marshall’s Office.

There is still no official word on what started the multi-million dollar blaze, or whether the destroyed buildings and businesses will be rebuilt.

The campaign for Patrick Brown said it was consulting its legal team after the leadership election organizing committee of the federal Conservatives voted to disqualify him from the race late Tuesday.

Despite fears of arrest, some Russians refuse to halt war protests

Despite a massive government crackdown on protests against the war in Ukraine, some Russians have persisted in speaking out against the invasion.