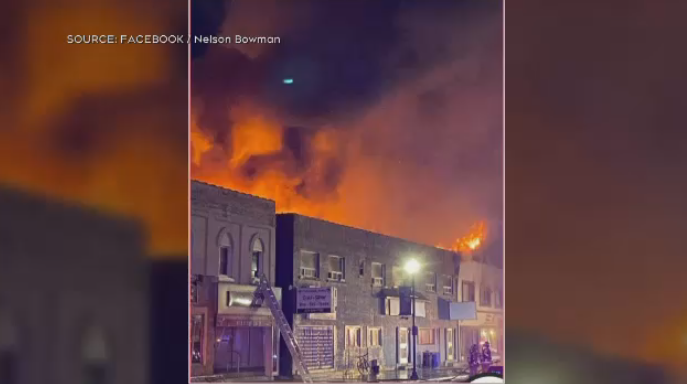 It’s expected to take several days for Hanover police and the Ontario Fire Marshal to investigate the blaze the tore through a downtown building.

The demolition of two buildings destroyed by fire in Hanover this week began late Friday.

Hanover Police Chief Chris Knoll tells CTV News the process is expected to last the entire holiday weekend, and precautions around the site are in place.

“The demolition and scene examination started today and is anticipated to take the weekend, targeting to finish by Tuesday. Security fencing has been installed to secure the area and the storefronts have been opened to foot traffic,” Knoll said on Friday evening.

He added that the street itself in front of the buildings will remain closed at this time.

According to police, 10th Street between 9th Avenue and 10th Avenue will remain closed for the weekend as fire and police investigators search the debris for evidence.

Police say Johnny K Sports continues to be assessed and a better understanding of that damage will be known as the clean up gets underway.

Hanover police have not received any reports of missing persons and all known residents of the fire-gutted buildings have been located and are accounted for.

The cause remains under investigation, as Hanover Police work with the Ontario Fire Marshal’s Office on the case.

Anyone with information or that has video of the fire, especially between the hours of midnight and 3 a.m. on May 19, are encouraged to contact investigators at 519.364.4280 ext. 101.

The Bank of Canada's strategy of rapidly increasing its key interest rate in an effort to tackle skyrocketing inflation will likely trigger a recession, a new study from the Canadian Centre for Policy Alternatives (CCPA) says.

A shooter fired on an Independence Day parade from a rooftop in suburban Chicago, spraying the crowd with gunshots initially mistaken for fireworks before hundreds of panicked revellers of all ages fled in terror. At least six people were killed and at least 30 wounded.

As passport processing delays and long lineups persist at Service Canada offices, the federal government is looking to buy 801 chairs for people standing in line by the end of this week.

The annual gathering of the Assembly of First Nations is being held this week in Vancouver under a cloud of criticism from its national chief, who has been suspended and denied entry to the meeting.

Travelling soon? Here's how to have a stress-free airport experience

Saving for retirement is becoming out of reach for young Canadians

A day after Russian President Vladimir Putin declared victory in seizing an eastern Ukraine province essential to his wartime aims, a city in the path of Moscow's offensive came under sustained bombardment, its mayor said Tuesday.

A new U.S. study shows that in high-trust neighbourhoods, those with a larger dog population had robbery rates that were almost two-thirds lower and murder rates that were cut in half.