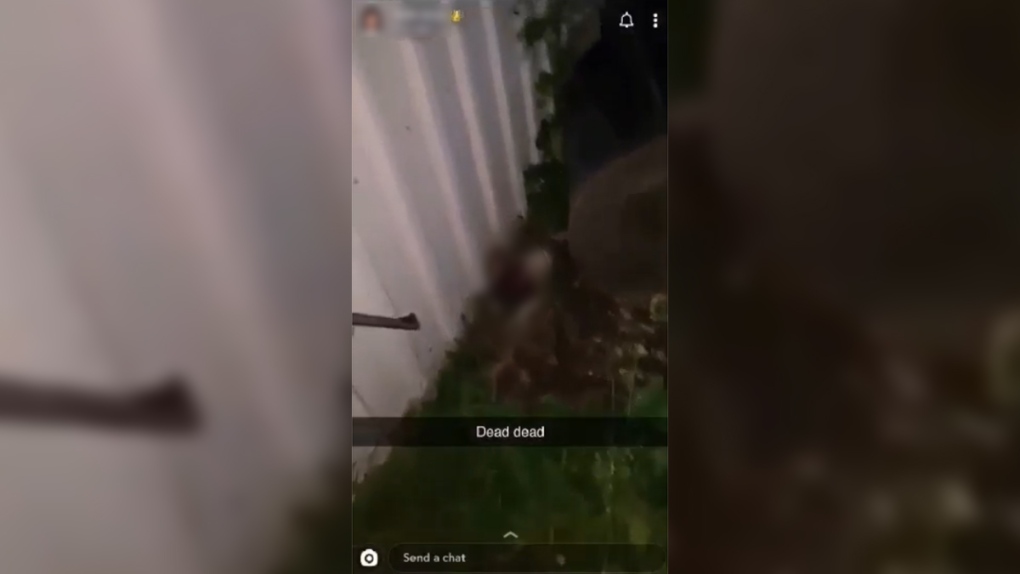 This blurred image from a video posted to Snapchat shows a possum that appears to have been shot.

MIDDLESEX CENTRE, ONT. -- Charges have been laid after a graphic video was posted to social media showing an opossum allegedly being trapped and killed in the Burford, Ont. area.

Brant County OPP say they received numerous complaints of animal cruelty after the video was posted to Snapchat on Saturday.

Investigators say it appears to show those involved driving out of Brantford, Ont. into the Burford area with an opossum they had trapped, and then the opossum being killed.

CTV News has seen the footage and in the video a female can be heard saying, "I'm going to shoot it after," as an opossum is removed from the box where it was trapped and held up by its tail.

All three people in the video can be heard laughing as the animal is returned to the box.

Afterward images of the bloodied opossum, which appears to have been shot in the head, are seen as a male voice comments about a "powerful rifle."

As a result of the police investigation, three Brantford residents, a 30-year-old, a 25-year-old woman and a 20-year-old man have each been charged with:

The 30-year-old is also facing one count of possession of a firearm where prohibited under the Criminal Code.

Provincial police say all the involved parties will appear in Brantford court at a later date to answer to their charges.