LONDON, ONT. -- A high rise proposal along one of the most historic blocks in London has local heritage advocates pushing back.

Farhi Developments is proposing a 40-storey riverfront building at 435-451 Ridout St., immediately behind a series of heritage buildings known as ‘Banker’s Row’, and next door to Eldon House, London’s oldest residence.

“I would call this the right building in the wrong location,” explains Kelley McKeating, President of the Architectural Conservancy of Ontario’s London Chapter. “This particular location (Banker’s Row) is one of only four national historic sites in all of London.”

Dating as far back as 1838, ‘Banker’s Row’ originally housed the offices of five major banks.

An extensive renovation of the three buildings was completed in 1970. 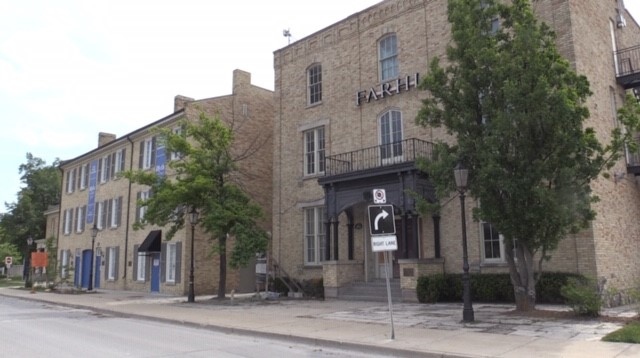 But city staff recommend the rezoning be approved because it conforms with the London Plan’s intensification goals, will include about 12 affordable units (80% average market rent), and include a public walkway connecting to the river.

The mixed-use tower would include 280 residential units plus commercial and office space.

Shmuel Farhi suggests his proposal will help revitalize the downtown, “More people downtown, and more work to come to the downtown, because after all the downtown is the heart and soul of any community.”

But the provincial ACO President Catherine Nasmith believes a 40-storey tower would, “loom over the National Historic Site.”

In an email to council Nasmith adds the proposal is, “just plain greedy, and out of scale with the surroundings.”

But Farhi Developments maintains that all heritage concerns raised by the city have been addressed by the current design.

The tower is positioned as far as possible from Eldon House, and the wall behind ‘Banker’s Row’ is designed to compliment the buildings.

Shmuel Farhi says it has taken nine years working with city hall and the Upper Thames River Conservation Authority to reach this stage.

In response to criticism that many of his corporation’s extensive land holdings in Downtown London are under-utilized, Farhi says his goal is to build on Ridout.

“We going to be proud of this development when it’s built, and (are) looking for that to be sooner rather than later,” Farhi adds.

“There’s a lot of complexities in that, but we are prepared to tackle that as soon as we get the approvals.”

Council’s Planning and Environment Committee will consider the rezoning application on May 31.