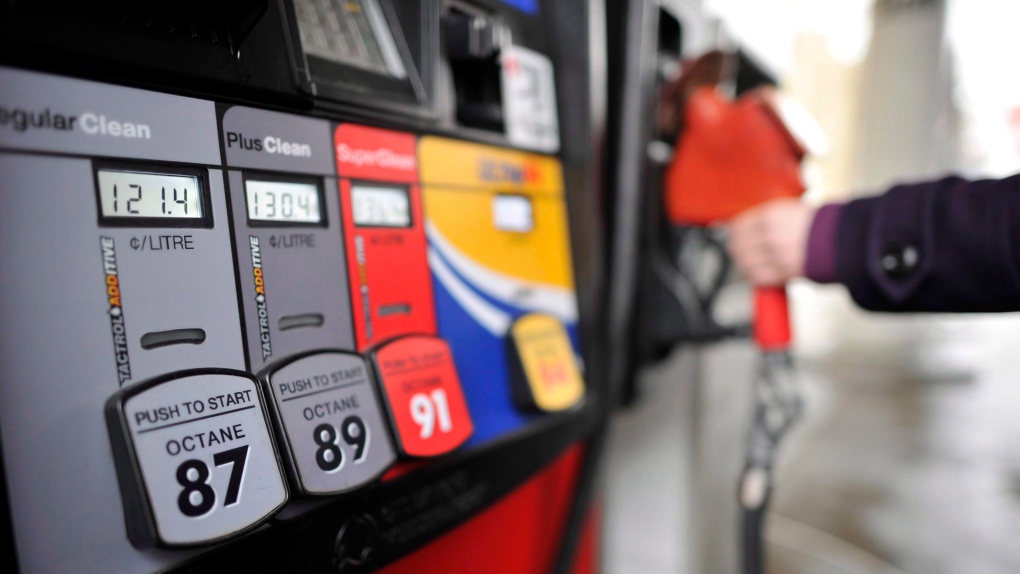 A motorist reaches for the pump at a gas station in Toronto on Thursday, February 24, 2011. (THE CANADIAN PRESS/Patrick Dell)

TORONTO -- Buried in Ontario's budget bill are fines of up to $10,000 per day for gas station operators who don't display government-mandated stickers about the price of the carbon tax.

The budget contains a new piece of legislation called the Federal Carbon Tax Transparency Act that would require gas stations to display the sticker on each pump. The sticker shows the federal carbon tax adding 4.4 cents per litre to the price of gas now, and rising to 11 cents a litre in 2022.

The legislation lets the government send inspectors to see if gas stations are properly displaying the stickers and sets out penalties for non-compliance.

The provincial Tories are slamming the federal carbon tax at every turn, and while Ford has said he is staying out of the upcoming federal election, he directly linked the two Friday in a speech to the Ontario General Contractors Association.

"When you go to the ballot box think of your future," he said. "Think of the country's future. Think of your children's future, because we cannot accept this carbon tax."Energy Minister Greg Rickford's director of communications said the stickers are about transparency.

"To penalize gas stations for not displaying this crosses a line into political vendetta by Doug Ford, as opposed to a public interest policy," he said.

Amir Attaran, a law professor at the University of Ottawa, called the government proposal a "farce" and said the legislation breaches the Charter of Rights and Freedoms.

"The government can mandate a no-smoking sticker because of public safety, but they cannot mandate a partisan political statement without destroying freedom of expression unconstitutionally."

Spokespeople for Suncor Energy, which operates Petro-Canada gas stations, and Husky Energy said they would comply with the legislation. The Canadian Fuels Association, which represents gas retailers, declined to comment.

Residents of provinces with the tax will be getting rebates on their income tax returns that start at $128 annually and increase for people with spouses or dependents at home. The federal government says a family of four in Ontario would get $307 this year.

Ontario is one of four provinces, including Manitoba, Saskatchewan and New Brunswick, where Ottawa imposed the levy because they opted not to impose their own pricing schemes on carbon emissions.

Ontario is challenging the carbon tax in court next week.