“We’re hoping to relocate the building before the snow flies,” said Dawn Miskelly, the executive director of Fanshawe Pioneer Village. “Early to mid-November is kind of our target date for that to happen."

On Thursday, Miskelly joined those behind the campaign as they received a $50,000 donation from Ironstone Building Company.

“We hope our contribution will help motivate many others in the community to step up and help reach the fundraising goal of $300, 000,” company President, David Stimac told the crowd.

The Fugitive Slave Chapel was built in 1847 on Thames Street. Before 1865 it served as a terminus on the Underground Railroad, which saw enslaved Black people in the United States flee to freedom in Canada.

Later converted to a residence, it remained on Thames Street until 2014.

Spared from demolition, a campaign saw it moved to a lot next to Beth Emmanuel Church on Grey Street but fundraising faltered.

But now, nearly all the pieces needed to move the chapel again are in place. 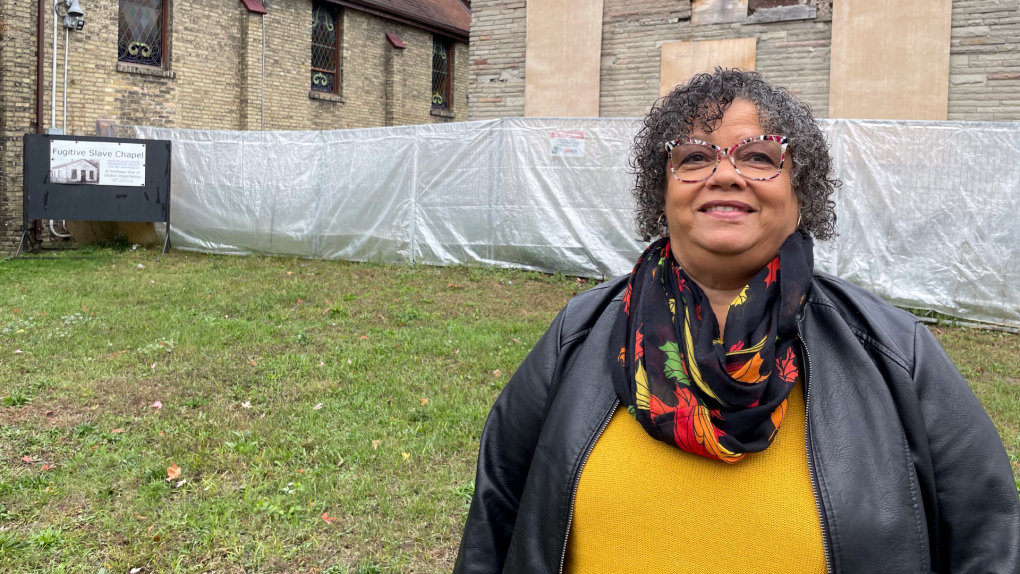 Christina Lord is a current board member of Fanshawe Pioneer Village, Sept. 28, 2022. (Sean Irvine/CTV News London)As a result, the same movers who brought the structure to Grey Street have begun work on a plan to move the chapel to the FPV.

“Hopefully, now it will find its forever home in a place it will be settled and loved and cared for, said Christina Lord, a current board member of FPV.

Lord is also a member of the London Black History Coordinating Committee and sits on the Fugitive Slave Chapel Committee.

It's her goal to ensure young people recognize the history behind the chapel walls.

“I almost feel as though you stood close to it, you could feel the energy that was there,” she tells CTV News.

During the cheque presentation, former London city councillor Harold Usher explained what that energy means to the region.

“This project is part of Canada’s history. It’s part of London’s history and it is a part of Black history,” he said.

And with the fundraising campaign nearly at its goal, it appears that finally, that is a certainty for the chapel.

“We have enough to fully restore the building. Once it is moved we’re starting right away with the restoration,” Miskelly confirmed.

She said the plan is to restore the structure to its 1850’s appearance.