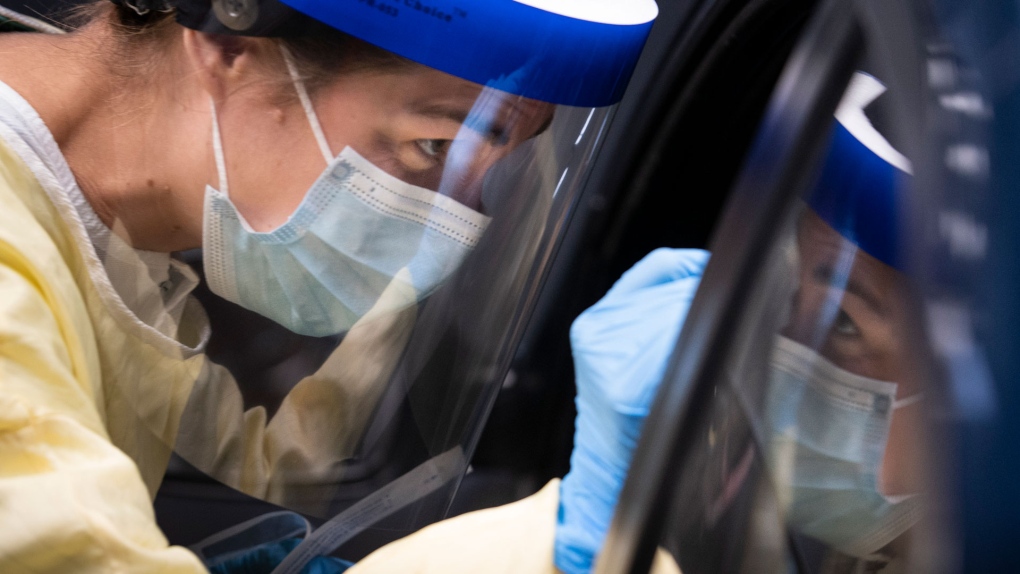 A nurse performs a test on a patient at a drive-in COVID-19 clinic in Montreal, on Wednesday, October 21, 2020. THE CANADIAN PRESS/Paul Chiasson

LONDON, ONT -- The Middlesex-London Health Unit (MLHU) is reporting a new death from COVID-19, which marks the fourth death since a second wave of cases began in Ontario.

According to the health unit the individual was a 71-year-old man associated with a long-term care home.

MLHU Medical Officer of Health Dr. Chris Mackie said Monday the man had been ill for some time and the death was not associated with an outbreak, but no additional details would be released.

The death toll for Middlesex-London since the start of the pandemic now stands at 61, and more than half have come from long-term care or retirement home settings.

On Monday there was just one new case reported for Middlesex-London which comes off a weekend of single-digit case counts.

Mackie added that while the numbers are moving in the right direction, there is a concern about a drop in the number of people being tested for COVID-19.

“We’re seeing less people being tested at the assessment centres here. We’re also, on the other side of things, when people are being diagnosed, we’re often seeing that they’re being diagnosed very late in their course of illness.”

The late diagnosis means “the next generation of spread” can’t be prevented by contacting those who don’t know they’ve been exposed.

He says ideally people should be getting tested within 24 to 48 hours of getting sick to prevent their illness from becoming a super-spreader event, and added that there are no long significant wait times at the Carling Heights assessment centre for testing.

While the numbers are low in Middlesex-London, in Elgin-Oxford there has been a jump in cases with 12 new infections being reported on Monday, bringing the total for the region to 337.

The rise comes amid an outbreak at a "congregate living setting" in Bayham where at least 31 people tested postive, according to Southwestern Public Health. More test results are still pending.

One person was reportedly admitted to hospital on Friday for COVID-19-related symptoms and later tested positive, prompting an additional 157 tests among other residents.

Provincial police also laid charges against a 36-year-old resident in Norwich Township for having an at-home gathering with more than 25 people on Halloween.

This is the latest example of gathering restrictions being ignored over the Halloween weekend.

A party with roughly 150 people near Western University in London was also broken up.

The hospital, the largest in southwestern Ontario, will only report the number of COVID-19 inpatients if the number climbs above five, which it did briefly last week.

The region currently has 48 active cases of COVID-19.

In total there have been 1,146 cases since the pandemic began with 1,037 recoveries and 61 deaths.

In Ontario the province has hit a new record high for average daily infections over seven days.

The seven-day average number of cases now sits at an all-time high of 919.

How one COVID-19 case at an Ottawa sports practice led to six outbreaks, dozens of infections

Cases of COVID-19 in children on rise in U.S., with highest weekly spike yet

WHO chief Tedros to quarantine after contact gets COVID-19

Trump threatens to fire Fauci in rift with disease expert

Santa photos with children will be different this year, Canadian malls say