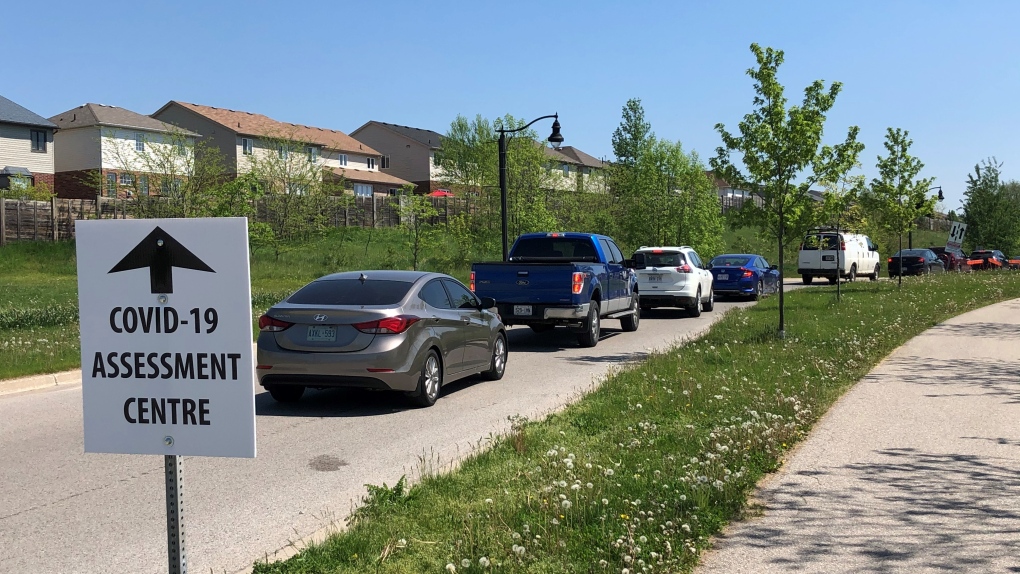 Vehicles line up at the COVID-19 assessment centre at the Carling Heights Optimist Community Centre in London, Ont. on Tuesday, May 26, 2020. (Jim Knight / CTV London)

MIDDLESEX COUNTY, ONT. -- The Middlesex-London Health Unit (MLHU) is reporting four new confirmed cases of COVID-19 on Tuesday – all in the City of London - and one new death.

The death, a woman in her 70s associated with a retirement home, brings the total number of deaths to 51.

The running total of cases now stands at 505, including 367 people who have since recovered.

Of the total, 468 are in the City of London and 165 are in long-term care or retirement homes, which account for just one of the new cases.

Eight outbreaks are being dealt with at seniors’ facilities in the region, but there have been no new outbreaks since Saturday.

There have been some concerns about long lines at assessment centres in the city, but you can check on wait times through the MLHU Twitter feed.

According to Dr. Chris Mackie, MLHU medical officer of health, “I would say that coming earlier has been more timely. If you are thinking of delaying your visit to the assessment centre to later in the day it's best to come closer to the opening hours of 11 .am.”

There were two new cases reported in Sarnia-Lambton, bringing the total there as of Monday night to 251, including 180 recovered and 21 deaths.

One new outbreak was declared on Monday, at Lambton Meadowview Villa in Petrolia, where one staff member has tested positive for COVID-19. This is the second outbreak at the facility, though so far in both cases there has only been one positive test.

The worst of the four outbreaks in the region is at Vision Nursing Home, where 22 residents and 20 staff are now ill, and there have been six deaths.

There was one new case reported in Elgin and Oxford counties on Tuesday, bringing the total there to 73, including 58 recovered and four deaths.

The new case is part of outbreak at Secord Trails in Ingersoll, where eight health-care workers have now tested positive. So far there are no resident cases.

There was no change in the numbers reported by Huron Perth Public Health as of Monday, with 51 cases, 44 recovered and five deaths in the region.

There were no new cases in Grey and Bruce counties as of Monday either, with the running total holding at 91.

There was one more recovery, bringing that total to 83, and there have been no deaths in the counties.

Provincially, there were 287 new cases and 21 deaths, the lowest numbers since March.

'Two years of income up in the air': How the pandemic has impacted Canadians' finances

'Don't be like Toronto:' Calgary mayor warns against large gatherings in parks

Heavy drinking is highest among younger people and those worried about finances, survey suggests

Thousands of travellers still arriving in Canada despite border restrictions