Four cats believed dead as the result of a fire, dozens rescued

LONDON, ONT -- Firefighters had more than flames to deal with as the entered a semi-detached home in south London Friday morning. Dozens of cats were in the house along with three family dogs.

It's estimated there were up to 40 cats inside the home at 68 Snowdon Crescent when it filled with smoke. Most of the cats were saved but it’s believed four didn't make it.

"It's very heartbreaking. I don't like seeing any animal suffer, but thankfully we saved what we could," says Sean O'Connell.

O'Connell and his mother live in the semi-detached home adjoining 68 Snowdon and heard frantic calls around 5:45 in the morning on Friday.

"The neighbour was screaming out for my mom to call the fire department because the fire broke out, it looks like in the kitchen."

O'Connell says fire crews were there within just a couple of minutes attending to the homeowner and the animals.

London Fire Department Platoon Chief Kirk Loveland had nothing but praise for the responding crews.

"Firefighters did a great job. There was a substantial number of [cats]. They rescued quite a few and saved quite a few with oxygen and CPR and the dogs were fine."

The home on Snowdon is identified on a Facebook page as the home of an animal rescue agency called Saving Animals’ Lives Together also known as S.A.L.T. rescue.

Orest Katolyk, the City of London's chief municipal bylaw enforcement officer, confirms to CTV News the resident of the home is part of a "City Approved Fostering Organization."

In a statement he added, "In 2014, Council approved a full exemption to the number of permitted cats and dogs at foster homes. Our priority is a balance between safety and providing shelter. We know these foster homes play an important role in making London a pro-adoption municipality."

The rescue is run by Bonnie Smith. O’Connell says Smith became overwhelmed by smoke as she tried to save the cats, "She was desperately trying to get them out of the house."

Loveland says she was taken to hospital as a precaution but was released shortly after, "She did suffer some smoke inhalation so, precautionary, we got her checked out." 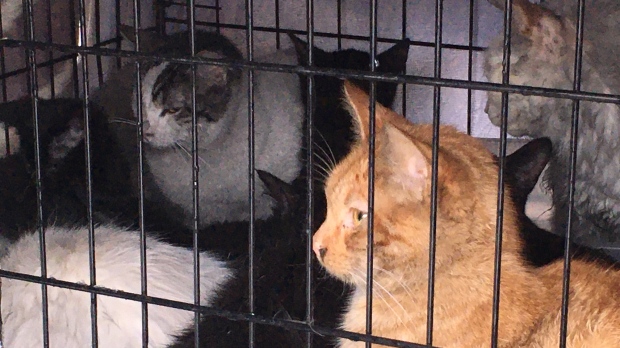 O'Connell temporarily took in about 25 cats.

"We brought them all in and we're trying to take care of them. The most distressed ones, they were taken away to animal care."

And hours after the blaze was knocked down scared cats were being recovered from their hiding spots. One was located under a deck and another under bushes in front of O’Connell’s home.

The cause for the fire remains under investigation, but damage has been estimated at $120,000.