A small but mighty group of former employees of the Bluewater Youth Centre near Goderich returned to their old workplace Wednesday.

They want the detention centre re-opened. The centre was closed on March 6, 2012 - putting 200 people out of work.

The province said the juvenile detention centre was underutilized and wanted to save money by moving the young inmates to facilities elsewhere in Ontario.

But overcrowding at jails like the Elgin Middlesex Detention Centre in London has correctional officers asking the government to consider re-opening the Bluewater centre.

Anjela McCool worked at the detention centre near Goderich for 12 years. She says, “We want Bluewater opened back up. This building is sitting empty. There are three new youth jails being built in Brampton, the Roy McMurtry Detention Centre is closing, London is getting a new jail built. Millions are being spent while this jail sits empty.”

McCool feels the Bluewater centre could re-open as a place for female inmates with mental health issues. No such facility exists in Ontario.

"They put them in segregation and they basically rot there," she says. "It's not the proper care."

Jack Hopkins, the former union leader at the facility, says raising the issue is important. "You have to bring attention by letting the people who make these decisions know that there's an interest."

But the government says they have no interest in re-opening the Bluewater centre at this time. That doesn't sit well with union officials.

"It's a shame; it's a waste," says Dominic Bragaglia, OPSEU Local 108 president.

The building is currently under the control of Infrastructure Ontario. 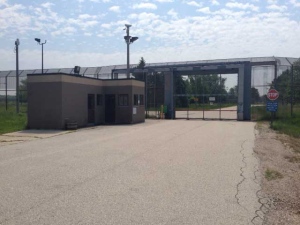