Former London Mayor Tom Gosnell passed away late Monday night in hospital at the age of 63.

Gosnell had been battling cancer and several related health issues and had been ill for some time.

Gosnell also served on the Board of Control from 2003 to 2010, during which time he was also budget chief and deputy mayor.

Former London mayor Anne Marie DeCicco-Best worked with Gosnell for years, first as a rookie councillor, then when Gosnell was her deputy mayor.

"He always had humour, and always had a way of being able to make people see the lighter side when there were some really tense times."

Former city hall controller Orlando Zamprogna regrets he didn't spend more time with him with Gosnell even after working with him on hundreds of projects.

"The Horton St. extension being one of them, tough battle but he managed it. The Convention Centre, I must say I was pleased to be a part of his game plan."

Former London police chief Murray Faulkner went to Laurier Secondary School with Gosnell, and remembers his friend as a good student and athlete.

"He was the team quarterback, junior football, and I guess as the quarterback of any team, no matter what level of play it's at, you have to be a leader, Tom was one of those individuals that was a born leader."

The flag outside city hall was lowered to half-staff Tuesday on the news of Gosnell's death and a book of condolences has been set up in the lobby.

Gosnell leaves behind a wife and three children. For details on visitation and funeral arrangements please visit the Logan Funeral Home website. 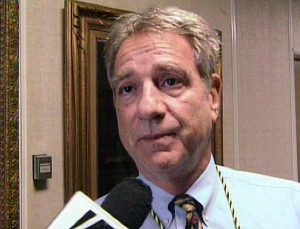