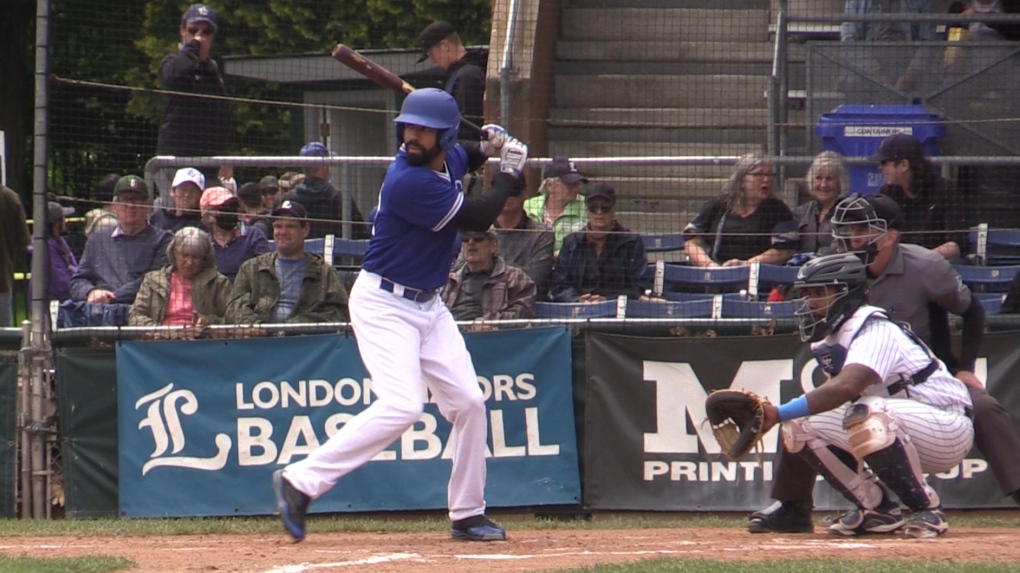 Dalton Pompey prepares to hit a pitch for the Guelph Royals at Labatt Park in London, Ont. on Monday May 23,2022. The former Toronto Blue Jay is playing in the Intercounty Baseball League (Brent Lale/CTV News London)

Fans at Labatt Park in London, Ont. got to see a former major league baseball player compete against their hometown team Monday afternoon.

Dalton Pompey, who played 64 games over parts of four seasons with the Toronto Blue Jays from 2014 to 2018 is now a member of the Guelph Royals of the Intercounty Baseball League (IBL).

“Dino (Roumel) our manager approached me and he said ‘come on, have fun, be able to be home and enjoy yourself,’” says Pompey.

“So I decided you know what, take a chance and here I am.”

Pompey made his IBL debut on Sunday, going 3-for-4 with a walk at the plate. 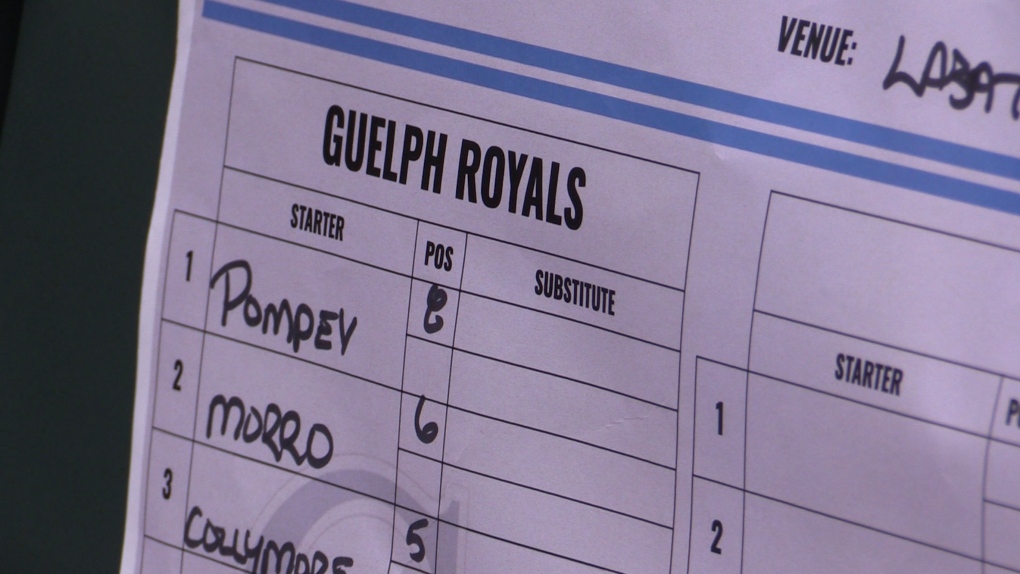 Dalton Pompey’s name is at the top of the lineup for the Guelph Royals at Labatt Park in London, Ont. on Monday May 23,2022. The former Toronto Blue Jay is playing in the Intercounty Baseball League (Brent Lale/CTV News London)

Monday, he was patrolling centre field and batting leadoff for the Royals against the Majors.

Pompey went 0-for-3 with a walk in their 6-1 loss to the Majors but did come within a foot of a home run to dead centre.

“So far it's been pretty good baseball,” says Pompey.

“I'm enjoying myself and as long as it's competitive, then I'm going to be home and I want to be here.”

There have been close to 50 players who started their careers in the IBL and made it to the Major Leagues, or who returned to the IBL after making it to the MLB.

Guelph manager Dino Roumel has coached MLB players Scott Thorman and Paul Spoljaric who brought their knowledge and professionalism to the IBL. He believes Pompey will do the same.

“Just the way he prepares for games, the type of person he is, he's such a grounded person,” says Roumel, when referring to the 29-year-old Mississauga native.

“He's playing for the love of the game, that's the greatest thing. He had an opportunity to go other places (Taiwan, and Korea) and chose to come back home and play here, so we're ecstatic about having him, and it means a lot to the entire league and especially our organization.” 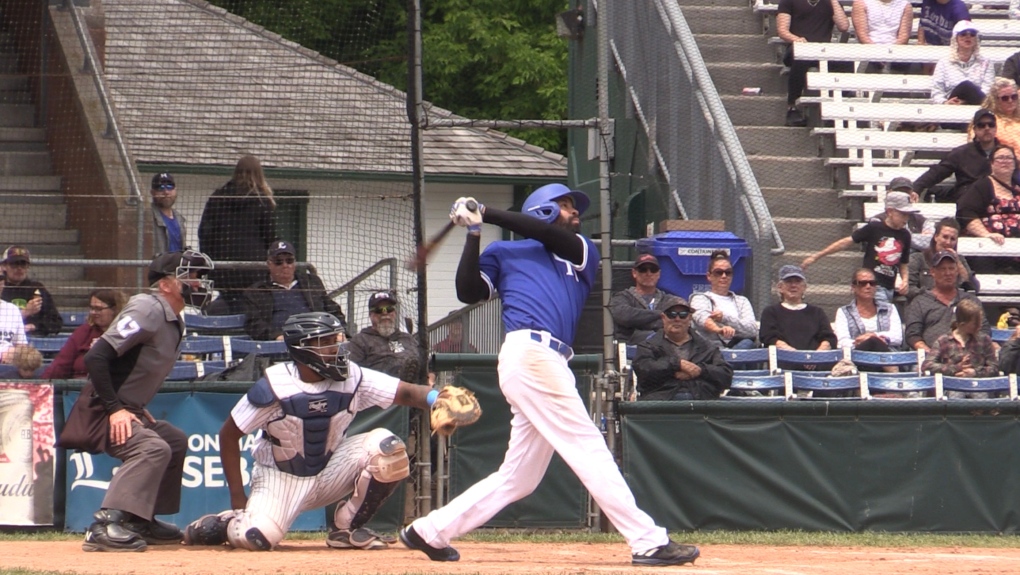 Dalton Pompey crushes a pitch to the warning track for the Guelph Royals at Labatt Park in London, Ont. on Monday May 23,2022. The former Toronto Blue Jay is playing in the Intercounty Baseball League (Brent Lale/CTV News Windsor)

He’s a name that fans recognize, and that’s great for the IBL, according to Majors manager Roop Chanderdat.

“One hundred per cent it will intrigue the fans,” says Chanderdat.

“He’s someone they've seen on TV, so it's great for the league. It’s great for everyone’s organization if he shows up to the road games.”

Pompey had stints in the minor league systems of the Arizona Diamondbacks and Los Angeles Angels after electing free agency after the 2019 season. He also played for a few independent league teams.

He’s unsure where he’ll play next, but for now, he plans on sticking it out with the Royals.

“I just want to bring some leadership and some guidance to the guys,” says Pompey.

“They always ask me questions about my career and things that help make them better. I'm an outlet for them and if they want to reach out and approach me about anything that I'm here for them.” 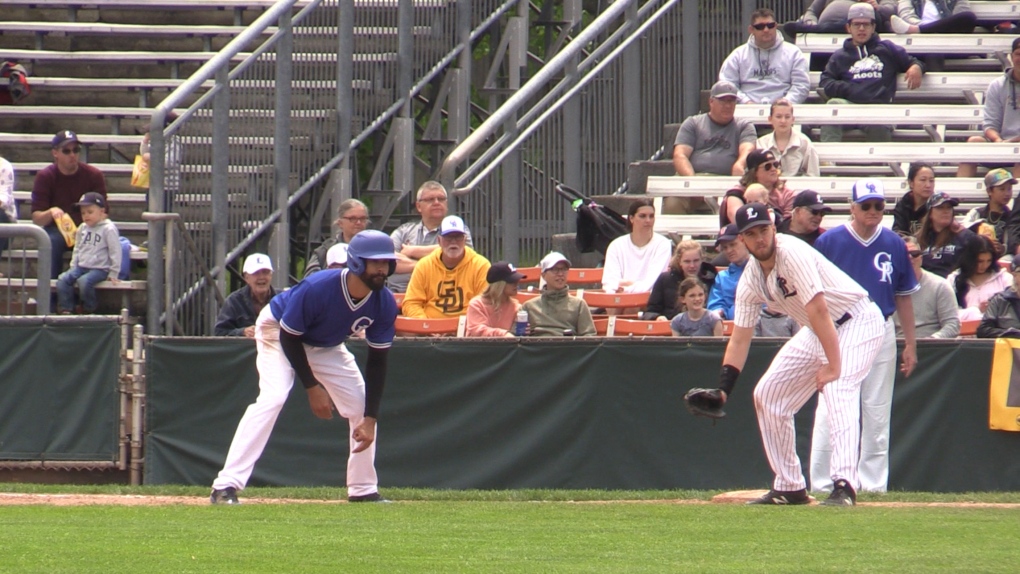 Dalton Pompey gets a lead off first base for the Guelph Royals at Labatt Park in London, Ont. on Monday May 23,2022. The former Toronto Blue Jay is playing in the Intercounty Baseball League (Brent Lale/CTV News Windsor)