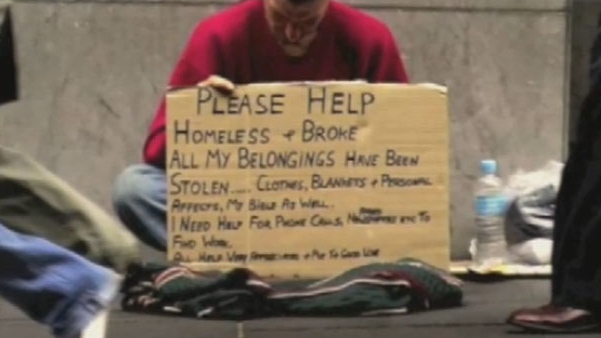 According to recent statistics, as many as 10,000 Canadian youth are homeless.

Bryant is among a coalition of individuals and organizations urging his former Liberal government colleagues to take the now 15-year-old Safe Streets Act off the books.

During his four years as Ontario's attorney general, Bryant says he "failed" by not repealing the act when he had the chance.

"I am accountable and responsible for it," he said at a news conference Monday. "I should have, period. I have no excuses."

Bryant was joined by fellow members of the coalition, who note that the wealthy, middle-class people or charities are not issued tickets when they fundraise on the streets.

"We, the Coalition to Repeal the Safe Streets Act, call on the Ontario government and the legislature to repeal this rotten law," Bryant said. "Let's stop criminalizing the poor for being poor."

Stephen Gaetz, the director of the Canadian Observatory on Homelessness, said the act is the outcome of a "moral panic" about homeless people living on the streets in the 1990s.

"That act, as I say, was a response to public fears and prejudice and it wasn't based on policy and evidence," he said.

Gaetz, a professor at York University, conducted research and found that between 2000 and 2010 incidents of panhandling and squeegeeing "declined dramatically" in Toronto. His research showed that 29 per cent of street youth surveyed reported panhandling and squeegeeing as their main source of income in 1999, a figure that dropped below three per cent 10 years later.

"So this becomes part of a policing practice that again is meant to intimidate and push homeless people off the streets," he said.

The majority of people ticketed can't -- and don't -- pay the fines, Gaetz said, estimating that the cumulative fines have placed $4 million in debt upon people in extreme poverty in Toronto.

Mary Birdsell of Justice for Children and Youth called the law "punitive and degrading."

"There are countless paths to a better society," she said. "There's no doubt that that's true, but the Safe Streets Act is not one of them. Put simply it is mean, it is bullying and it is beneath us."

The coalition has asked for a meeting with current Attorney General Madeleine Meilleur, Bryant said.

A constitutional challenge to the law failed in 2007 when the Supreme Court of Canada denied leave to appeal to 11 homeless men convicted under the act in 2001 for washing windshields or asking Toronto drivers for money.

Both a trial judge and the provincial Appeal Court agreed the law infringed on individual charter rights, but said the infringement was justified in the interests of public safety.

The Liberals opposed the legislation when it was brought in by Mike Harris's former Conservative government as part of a package of law-and-order measures.

The law banned people from stopping cars and offering to wash their windshields, and made illegal "aggressive panhandling" and disposing of refuse like syringes and used condoms in public places. Bus stops, taxi stands, automated tellers, parking lots and people getting in and out of a vehicle were also deemed off-limits for panhandlers.