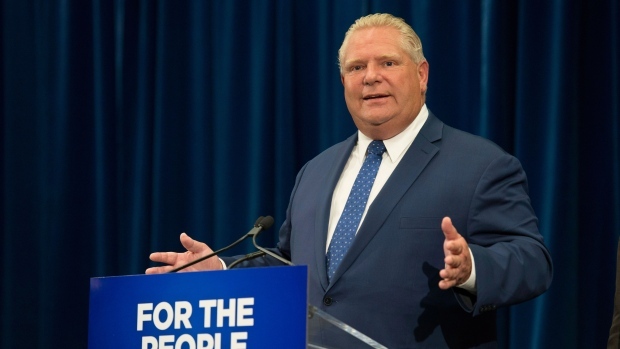 TORONTO -- Doug Ford defended his decision to shake up the senior ranks at Hydro One despite criticism that the move led to the collapse of the utility's multi-billion planned takeover of an American company.

In an unapologetic statement issued Thursday, the Ontario premier said he remained committed to improving the partially privatized utility, which has the province as its largest shareholder.

"Our government ran on a clear promise to clean up the mess at Hydro One," Ford said. "This included a firm commitment to renew the Hydro One senior leadership that had lost the confidence of Ontario ratepayers."

The premier's comments came after the Washington Utilities and Transportation Commission rejected Hydro One's $6.7 billion takeover of Avista Corp. on Wednesday over concerns of political interference.

The regulators had pointed to Ford's move to force the Hydro One chief executive to retire as proof that the province was willing to intervene in business operations.

Mayo Schmidt's early retirement was quickly followed by the resignation of the utility's entire board, as well as downgrades and lower values of Hydro One and Avista shares.

Ford noted that Schmidt -- who he had dubbed the "six million dollar man" -- and the utility's former board were the architects of the Avista deal.

"This is a deal that was put together by the former board and former CEO of Hydro One - a deal that did nothing to lower hydro rates for Ontario residents," he said. "Our government remains unwavering in our commitment to the people of Ontario to reduce hydro rates and provide a reliable energy system."

Hydro One stands to face more than $133 million in penalties over the quashed deal, according to transaction documents.

Energy Minister Greg Rickford noted, however, that regulators in two more U.S. states still had to make their own decisions on the deal, although it was unclear what chances the transaction had of succeeding given the Washington State rejection.

"I think it would be irresponsible to comment on any fee that we would incur and disrupt a process that's still very much available to both Hydro One and Avista and the two other regulators that are yet to make a final decision," Rickford said.

Rickford also said the Washington regulators had not blamed the scuttling of the deal on any one government.

"If you read the decision you'll see very clearly about a concern of past, present and previous possibilities of government interference," he said.

The Washington regulators, however, repeatedly raised red flags about the Ford government's dumping of Schmidt and the board of directors.

"Provincial government interference in Hydro One's affairs, the risk of which has been shown by events to be significant, could result in direct or indirect harm to Avista if it were acquired by Hydro One," they said. "This, in turn, could diminish Avista's ability to continue providing safe and reliable electrical and natural gas service to its customers."

The province's opposition parties blamed the Ford government for the deal falling through.

NDP legislator Ian Arthur said the regulators' decision "makes it clear that Doug Ford's political meddling has sent shockwaves through the business community and increased the risk of doing business in Ontario."

Liberal Mitzie Hunter said the message to Ford should be clear: "stop meddling at Hydro One."

Robert Catellier, an analyst for CIBC, called the Washington regulator's ruling "damning" and said it will make it hard for Hydro One to "meaningfully expand beyond Ontario."

"The Washington Utilities and Transportation Commission made it clear in its order there is no merger commitment that can be made that could protect Hydro One against provincially imposed requirements that would constrain its ability to live up to its commitments under the settlement agreement," he wrote.

Anita Anand, a University of Toronto law professor and expert on corporate governance, said the commission's decision means the Avista deal is "not going anywhere fast."

Anand said the regulators' decision should send a signal to the Tories.

Avista and Hydro One had filed a joint application with the commission in September 2017 to approve the proposed merger agreement.

Under the deal, Avista would have become a wholly owned subsidiary of the Toronto-based electric transmission and distribution utility, but would have maintained its corporate headquarters in Spokane and continued to operate under the same name, management team and employee structure.