There's some good news for residents of Midwestern Ontario, ravaged by flooding, it appears the worst is over.

While there were concerns for more flooding early Saturday morning, the water has crested in communities like Wingham and Blyth, downstream from Harriston, which saw the worst of the flooding.

Officials will monitor conditions over the weekend.

Although a Flood Warning remains in place for the North Maitland, Little Maitland and Lower Maitland River watersheds.

In Harriston, which saw over 170 mm of rain in 7 hours Thursday night, the cleanup continues.

All homeowners evacuated by the flood waters -- aside from those in the Harriston trailer park -- are being allowed home.

Only one road remains closed in town. However, there is a boil water advisory in effect for Harriston as a result.  Residents impacted by the advisory can pick up bottled water at the Harriston Firehall.

A plan for waste and garbage collection is being formulated as many Harriston residents have wet basements to clean out.

Here are some rainfall amounts in millimetres from 8 a.m. Thursday to 2 p.m. Friday: 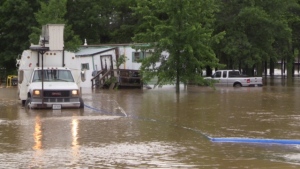