It's been six months since Keith Patterson took his life while serving a sentence at the Elgin Middlesex Detention Centre.

He was in a segregation cell when he used a security blanket to hang himself.

Now, for the first time ever, the government has allowed a reporter to walk the floors of Trilcor - a little known company where inmates make a variety of items - including the blankets.

It's a work program for inmates with operations at four different jails and in 2014 nearly 2,000 inmates earned the privilege to work there.

Jobs can include sewing inmate clothing, making licence plates and fabricating so-called suicide-proof gowns and blankets - like the one Keith used to take his own life.

His sister Marcie Patterson says, "He's watching over his own kids, that he loved very much...He wrote us a letter three days before this all happened, saying that he was excited to get out of jail on the 15th of October. He was going to get his son back, his son Ryder."

Keith was checked on regularly, but he was still able to turn a security blanket - a blanket that is supposed to prevent suicides - into a noose.

"If these are supposed to be suicide-proof and my brother, from what they are saying, strangled himself with these sheets, what's that proving? It's not proving that they are safe at all," Marcie says.

Tammy Carson is the head of OPSEU's provincial health and safety team for corrections and she says these security blankets should be put to rest.

"[They] haven't really been that effective. They do have certain hazards they present themselves, and as we have learned, nothing is so-called foolproof."

She says Keith isn't the only inmate who found a way to end his life using a security blanket - there have been others.

"Over the past few years, related to the use of blankets and gowns...there have been three."

That's three people who overcame the security stitching, the plush patches and tear-proof fabric to form a noose that could hold about 200 pounds.

And while there are dozens of manufacturers that specialize in so-called suicide-proof blankets and smocks, Ontario's Ministry of Correctional Services makes its linens in house.

Those blankets, all inmate clothing and even licence plates are made at the Central East Correctional Centre in Lindsay, Ont. through a little known company called Trilcor.

It seems like a regular factory - except all the workers are wearing orange.

About 40 inmates work in Trilcor's Lindsay facility every day. Last year they cranked out over two million licence plates.

Trilcor is one of the rare government organizations that actually makes money - for example, by selling the plates - and by manufacturing clothes, security gowns and blankets.

In the gowns and blankets there is extra stitching to make it tough to tear and they're made of a durable and sturdy material - so sturdy that the gown can pretty much stand by itself - but quality control measures are minimal. Staff say the sewing instructor checks over the stitching, but the blankets don't go through strength or tear tests before they leave the facility.

Chris Butsch of OPSEU Local 368 has worked at the Central East Correctional Centre for years and says lately, there have been problems.

"They're able to pull the stitching out of those blankets and use it for other purposes."

Trilcor staff say these security blankets don't have a specified lifespan - they're supposed to last forever - and while correctional officers are supposed to check the blankets before giving them to an inmate, inmates typically only get a fresh blanket once a month has passed - or it's soiled.

Government officials aren't talking about how the blanket Keith had was manipulated - or how other inmates who have attempted or succeeded in taking their own lives have done it - but it's a question that haunts Marcie.

In the last fiscal year, Trilcor produced 1,400 security blankets and only three have been used in successful suicides - but OPSEU says there have been many more attempts thwarted only by vigilant officers.

An inquest into Keith's death is expected, but a date has not yet been set.

In the last fiscal year, 1,730 inmates took part in the rehabilitative work program - either making licence plates, fabricating bed linens and inmate clothes, washing clothing in an industrial laundromat or working in the engraving shop making plaques and recognition gifts.

There is capacity for 120 screened inmates to work in the program across the province. Last year, an average of 77 inmates/day took part.

Working is considered a privilege; giving inmates something constructive to do to pass the time, new work skills and in some cases, credits towards high school diplomas.

They aren’t paid in cash, but do earn perks - such as soda pop at lunch. Inmates typically work a shift from 8 a.m. through 4 p.m. and are searched before entering the shop and upon exit. 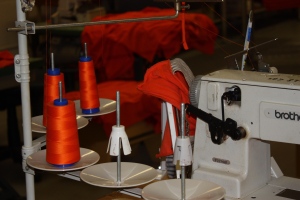 Inside Trilcor: Where Inmates Make Blankets, Licence Plates and More