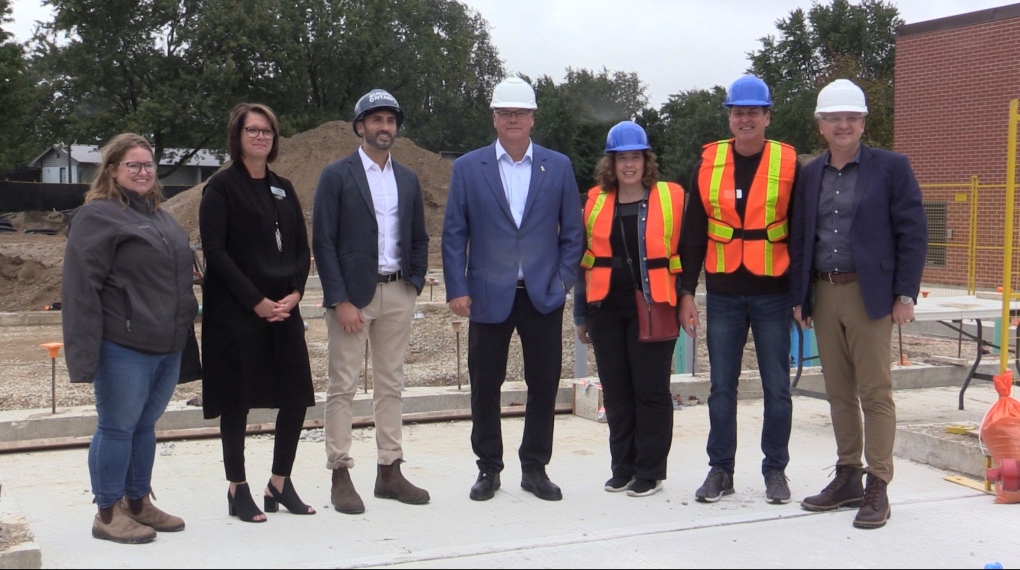 Officials including Education Minister Stephen Lecce pose for a photo at the construction site of the first licensed childcare centre in Thames Centre on September 26, 2022. (Brent Lale/CTV News London)

A build is underway in Dorchester, Ont. to bring an EarlyOn Child and Family Centre to River Heights Public School.

Education Minister Stephen Lecce toured the site Monday alongside MPP Rob Flack and members of the municipality and the Thames Valley District School Board.

The cost of the centre was initially pegged at $6.6 million, but will now cost $8.4 million.

Construction began in June, and is expected to be completed in the spring of 2023.

“It will have spaces for 10 infants, 30 toddlers and 48 preschoolers,” says Flack.

He adds, “This government is about growing, and meeting the needs of all community members. I’m excited to have Minister Lecce here to see work under construction, capital projects are key to grow this province. This isn’t spending, it’s investing in communities, families and kids.”

The collaboration between Thames Centre, County of Middlesex, London CMSM and the Ministry of Education will offer programs and services which promote early learning and development.

“This is the first step of many in getting childcare spots here,” says Elliot who feels there is a huge gap in services her region.

Elliot says even with 88 spots, they will still need waiting lists, but they will celebrate the first step.