The five-alarm fire was noticed by a passerby around 2 a.m. and emergency crews were called in.

Around 4 a.m. Huron County OPP officers were called to the scene to assist and eventually 40 firefighters from five stations were involved.

Marty Bedard of the Huron East Fire Department says “It’s one long building, it’s approximately 800 feet long. It was fully engulfed when we got there so it’s substantial damage.”

The fire closed Cranbrook Road between Brussels Line and McDonald Line for most of the day.

Because the fire was on a side road outside of town there were no hydrants, so fire crews had to truck water to the scene.

That dramatically lowered the reservoir in Brussels and residents were asked to conserve water.

The extremely cold weather was also a serious problem for firefighters.

Fire crews will likely be on scene into the night to monitor the smouldering factory and while the fire isn’t considered suspicious the Ontario Fire Marshal’s office is investigating.

MDL is one of Huron County’s largest manufacturers and the destruction means nearly 100 people are at least temporarily out of work.

There is no official estimate on the damage, but it’s likely more than a million dollars, if not higher.

There is no word from the company on whether they will rebuild in the same location.

In a statement the company says it has assembled a team of managers and employees to set up a temporary facility inside the former Brussels School to continue service for customers.

Employees will be contacted over the next few days about the company’s plans. 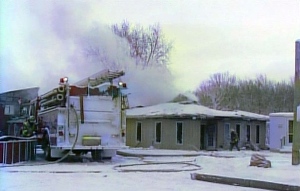