It was just after 6 a.m. Wednesday when a city worker noted flames and smoke rising from an area of new waste dumped at the Manning Drive facility.

On inspection, the worker saw flames along the leading edge of the dumpsite, stretching over 12 metres (40 feet).

At least 25 firefighters were dispatched. As they arrived, smoke, partly due to heavy humid air, was crossing Wellington Road.

“I thought it would be all day, just having to tear apart the pile. The excavators helped a large amount, assisted us in getting into the deep areas of the fire. We also used some foam to help penetrate the fire itself.”

It took three hours to bring the fire under control. 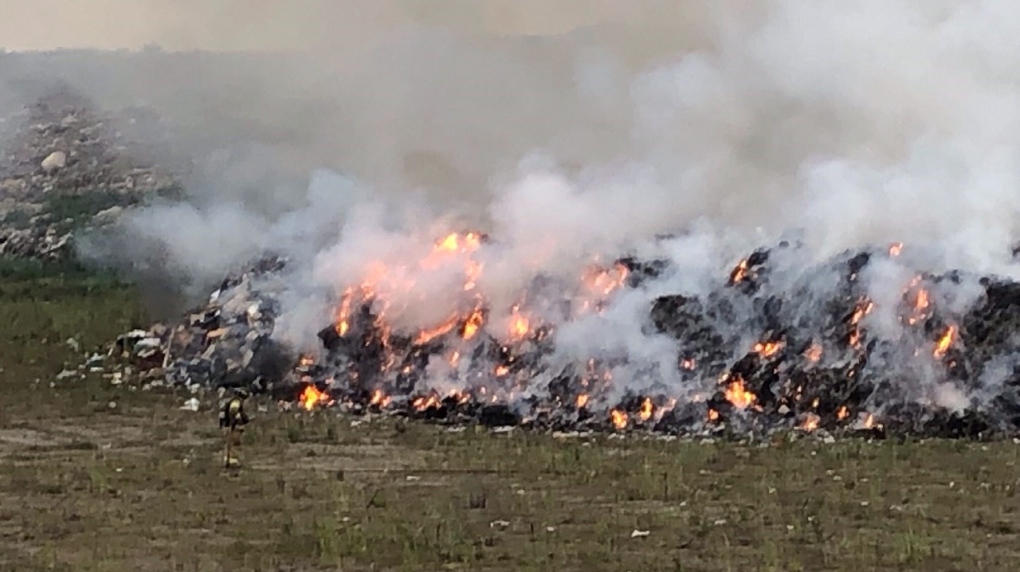 A London firefighter stands ready to fight a massive garbage fire at the London landfill on Manning Drive on Wednesday, June 30, 2021. (Supplied LFD)

Fitzgerald says storms Tuesday evening are the suspected cause.

“We think lightning may have started the fire and it just smouldered overnight.”

A dozen firefighters remained on the scene to ensure hotspots did not flare up.

“It's not really posing any real environmental hazard problems. There’s no fear from the smoke that was emitting from this fire earlier,” Fitzgerald confirmed.

Fire crews were forced to use tanker trucks to bring water into the site, located nearly two kilometres from the nearest hydrant.

While an unpredictable fire to fight, both Fitzgerald and the city’s division manager of waste management, Mike Losee, say a team effort helped contain it.

“Ideally what we like to do is try to keep materials that are extremely dry covered with a bit of wetter curbside waste. But sometimes if they’re is a lightning strike, there is not much we can do about it.”

Ten children in Canada were found to be suffering from severe acute hepatitis not caused by known hepatitis viruses over a nearly six-month period recently, the Public Health Agency of Canada announced Friday.